Update on Indonesia in 2019

Semen Indonesia’s third quarter results this week give us a reason to look at one of the world’s largest cement producing countries, Indonesia. As the local market leader, Semen Indonesia’s financial results have been positive so far in 2019 following its acquisition of Holcim Indonesia at the start of the year. Analysts at Fitch noted that gross margins for Semen Indonesia and its rival Indocement grew in the first half of 2019 as coal prices fell and cement sales prices rose.

Sales volumes, however tell a story of local production overcapacity and a move to exports. Domestic sales volumes fell by 2.05% year-on-year to 48.8Mt in the first nine months of 2019. Cement and clinker exports nearly compensated for this by rising by 15.4% to 4.8Mt. This is brisk growth but slower than the explosion of exports in 2018. Semen Indonesia’s local sales from its company before the acquisition fell faster than the national rate at 4.9% to 18.7Mt. The new sales from Solusi Bangun, the new name for Holcim Indonesia, partially alleviated this. It’s been a similar story for HeidelbergCement’s Indocement. Its sales revenue and income have risen so far in 2019. At the mid-year mark its sales volumes fell by 2.3% year-on-year to 29.4Mt. 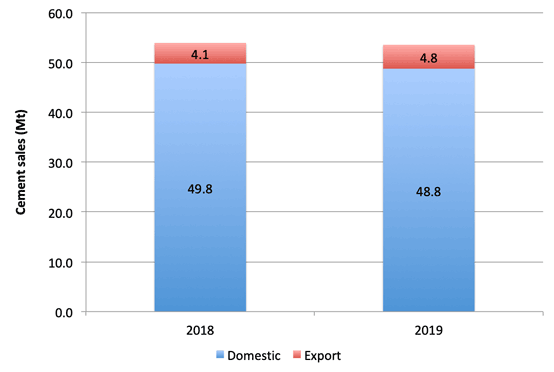 Geographically, Indonesia Cement Association (ASI) data shows that over half of the country’s sales volumes (56%) were in Java in the first half of 2018. This was followed by Sumatra (22%), Sulawesi (8%), Kalimantan (also known as Indonesian Borneo, 6%), Bali-Nusa Tenggara (6%) and Maluku-Papua (2%). By cement type the market is dominated by bagged cement sales. It constituted 74% of sales in September 2019. The main producers have been keen to point out growth in bulk sales as its share has increased over the last decade. 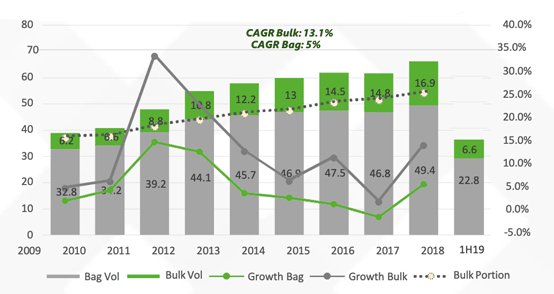 Previously the main story from the Indonesian market has been one of overcapacity and this has continued. It had a utilisation rate of 70% in 2018 from production volumes of 75.1Mt and a capacity of 110Mt, according to ASI data. This was likely to have been a major consideration in LafargeHolcim’s decision to leave the country and South-East Asia (see GCW379) with no end in sight to the situation in the short to medium term. At the end of 2018 it felt like consolidation was in progress following this sale and the reported sale of Semen Panasia. So far though this has been all and perhaps the upturn in the second quarter might buy the producers more time.

As mentioned at the start, another aspect of the Indonesian market deserving comment is that it is one of the first countries with a large cement sector where a Chinese company has made a significant entry. Conch Cement Indonesia, a subsidiary of China’s Anhui Conch, became the third largest producer following the acquisition of Holcim Indonesia. Semen Indonesia and Indocement control 70% of local installed capacity across both integrated and grinding plants with 51Mt/yr and 25.5Mt/yr respectively.

Conch Cement Indonesia is the next biggest with 8.7Mt from three integrated plants and a grinding unit. It’s in a tranche of three smaller producers locally, along with Semen Merah Putih and Semen Bosowa. Fitch also picked up on this in a research report on the cement sector published in August 2019. It pointed out that, although Holcim Indonesia and Indocement had gained pricing power through their leading market share, this is being eroded by local producers owned by Chinese companies.

Depending on how you look at it, Indonesia has the ‘fortune’ to be only the second largest producer in South-East Asia, after Vietnam. China, the world’s largest producer, is not too far away either. As can be seen above this can be a mixed blessing for local producers as the market changes. Overcapacity abounds, a major multinational has moved out, a local firm has consolidated the market as a result and Chinese influence grows steadily. Indonesia could well be an example of things to come for other markets.