The National Council for Cement and Building Materials (NCB) International Seminar is running this week in New Delhi and this gives us a good opportunity to take a snapshot at the world’s second largest cement industry.

Data from the Ministry of Commerce & Industry shows comfortable cement production growth of 4.4% year-on-year to 255Mt in the first nine months of 2019. As graph 1 shows there was higher production growth in 2018 but this followed a decline in 2017, due to partly to the government’s demonetisation policy. October 2019 confirms a trend of falling year-on-year growth from August 2019 onwards following a peak growth rate in mid-2017. 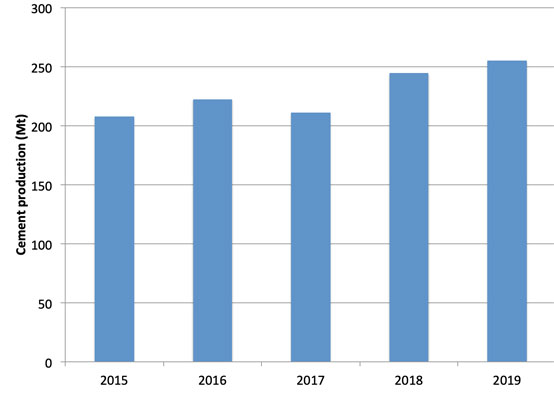 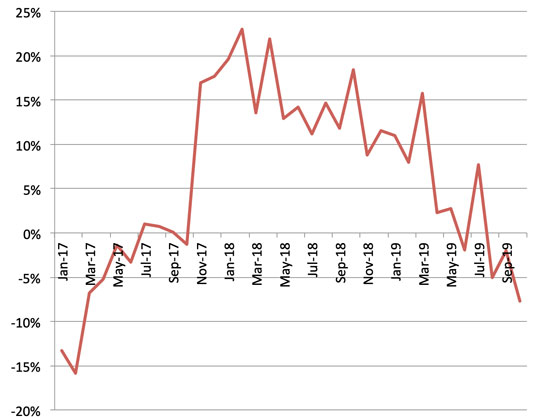 Analysts like ICRA have blamed the growth slowdown on the general election in mid-2019 and then the monsoon rains. By region in the six months from April to September 2019 it noted a slowdown in demand due to slowing government projects in northern, eastern and central areas. Labour concerns were reported in the north, centre and Gujarat in the west. Raw material shortages were picked up on such as water in Maharashtra and sand in the east and Andhra Pradesh. Positive growth was reported in Kerala, driven by post-flood reconstruction and low-cost housing schemes, and in Karnataka due to general construction activity. Broadly, UltraTech Cement, the country’s largest cement producer, in its November 2019 investor’s presentation, agreed with this assessment. It noted growth in the northern region and declines elsewhere. Like ICRA it too picked up on low cost housing declaring it to be a ‘key cement consumption driver.’

Away from the figures the main news stories have been continued consolidation such as the auction for Emami Cement and UltraTech Cement’s acquisition of Century Textiles and Industries. The sale of the former for plants in east and central regions has been linked to all the major local producers, including those owned by LafargeHolcim and HeidelbergCement. A report in the Hindu newspaper last week quoted a source placing UltraTech Cement and Nirma Group as the frontrunners with a valuation of around US$700m and an announcement at some point in December 2019. Despite UltraTech Cement’s market dominance nationally, its 17% production share in the east is low compared to its presence elsewhere. Nirma Group’s subsidiary Nuvoco Vistas is one of the smaller producers but, notably, it picked up Lafarge India’s assets in 2016.

Investment in new production capacity has continued with announcements from both JSW Cement and HeidelbergCement in recent weeks about expansion plans well into the mid-2020s. This follows planned projects from Dalmia Bharat Cement and Ramco Cement as well as orders from the JK Cement and Shree Cement. This ties into the capacity growth forecasts of around 120Mt over a similar timescale that the analysts were predicting in the middle of 2019. JM Financial, for example, pinned most of this growth on the south followed by the east and north. However, The India Cements said in November 2019 that it was delaying its expansion projects in Uttar Pradesh due to slowing government spending.

As is usual for a country with a low per capita cement consumption, on the national scale, one of the tensions in the Indian cement industry has been the balance between the capacity utilisation rate and the commissioning of new capacity. Its utilisation rate was below 60% in 2018 and a number of producers started reporting the negative effects of higher input and raw materials costs on their financial results. Knowing when to stop and start capacity growth is critical in this kind of environment. Specifically in India’s case curveballs such as government action on pollution and the country’s growing need for imports of coal as well as a burgeoning waste fuels sector are factors to keep an eye on. Finally, general trends such as UltraTech Cement’s focus on the Indian market, despite buying assets outside the country, are also compelling to watch as it chooses to concentrate on just one country. There are parallels here with other similarly-sized multinational that have also been focusing on core markets elsewhere in the globe.

Last modified on 04 December 2019
Published in Analysis
Tagged under