Yesterday, on 14 April 2020, the International Monetary Fund (IMF) forecast a 3% gross domestic product (GDP) growth contraction in 2020 due to negative economic effects from the coronavirus outbreak and its containment. Most regions around the world may experience negative growth in 2020 with exceptions only in so-called Emerging and Developing Asia and Low-income Developing Countries. This is just one projection among many coming out at the moment but the prognosis is downward. This begs the questions: how will cement companies cope?

Markets for building materials are not going to disappear in these conditions but demand looks likely to be reduced. Added to this, an industry that’s been facing increasing production overcapacity over the years may be challenged by additional competition effects. Here we will look at the debt profile of some of the major multinational cement producers outside of China. Please note that this is a cursory examination of corporate debt that only looks at simple financial indicators. Company financial officers want to present themselves in best possible light and will have alternatives that point to their strengths. For a detailed view we refer readers to the credit rating agencies and the companies’ published financial information directly. 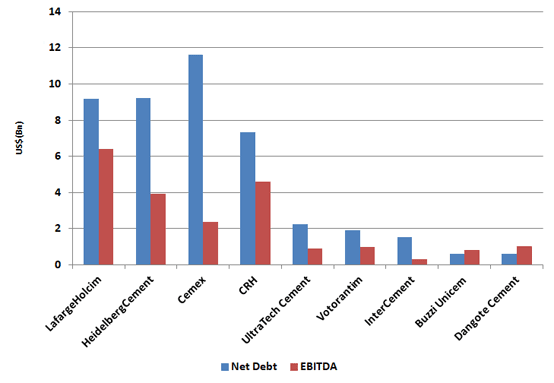 Graph 1 presents a comparison between net debt and earnings before interest, taxation, depreciation and amortisation (EBITDA) in real terms. The bigger the gap between debt and earnings then the more one starts to wonder how it can be repaid. One feature to note in this graph is the size of the debt of the three largest producers – LafargeHolcim, HeidelbergCement and Cemex – despite the fact that the companies are of different sizes. Cemex’s high debt to earnings ratio has been much commented on previously following its acquisition of Rinker just before the financial crash in 2007 and 2008. Unfortunately though, despite strenuous mitigation efforts, it remains prominent. Other positions to note are those of Buzzi Unicem and Dangote Cement, which have higher earnings than debts. These are envious positions to be in. 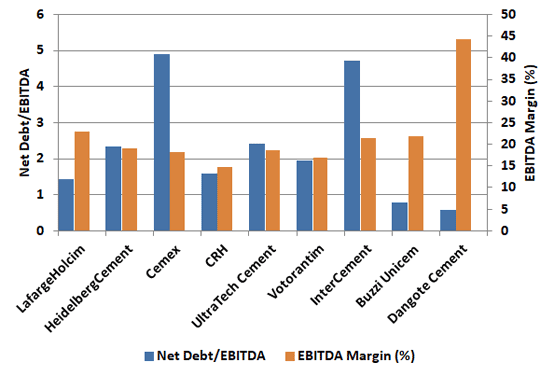 Graph 2: Net debt/EBITDA and EBITDA Margin for selected multinational cement companies in 2019. Source and notes as in Graph 1.

Graph 2 shows the ratio of net debt and EBITDA and the EBITDA Margin, a company’s earnings divided by its revenue. This graph better shows the relationship between debt and earnings. This can be seen well in a comparison between LafargeHolcim and HeidelbergCement. The latter has higher debts with respect to its earnings. Its debt jumped in 2016 following its acquisition of Italcementi. LafargeHolcim’s debts ballooned followed its formation by merger in 2015 but this was in line with the jump in its equity. Where it struggled was with slow earnings in the years afterwards. However, bold divestments in South-East Asia in 2018 and 2019 appear to have fixed this.

Other companies to watch in the higher Net debt/EBITDA category include India’s UltraTech Cement and both of the large Brazilian multinationals, Votorantim and InterCement. In recent years UltraTech Cement has been busy buying up other cement producers in India. The difference between the Brazilian companies may reflect the fallout from their fight to buy Cimpor back in 2012. InterCement and its parent company Camargo Corrêa won the battle to acquire the Portuguese company but Votorantim was given selected international assets outside of Brazil. Unfortunately, the Brazilian market then collapsed and Camargo Corrêa has reportedly been trying to sell some or all of its cement assets ever since.

The other financial indicator in Graph 2 is EBITDA margin or earnings/operating profit as a percentage of revenue. Higher is generally seen as better here in comparison to other companies in the same sector. Note how LafargeHolcim is ahead of HeidelbergCement and Cemex, possibly due to its cost cutting and synergies since the merger. InterCement also has a relatively high EBITDA margin, boosted by a pickup by the Brazilian economy in 2019. Again, Buzzi Unicem and Dangote Cement stand out. Both of these are public companies but are associated with family or individual ownership, although in very different markets. Neither has really indulged in any large-scale acquisitions in recent years. Dangote Cement has been steadily expanding but through building its own plants and distribution networks.

We’ve not mentioned CRH as its figures seem ‘average’ compared to the other cement producers discussed here. Average is of course relative for one of the world’s biggest building materials manufacturers with a net of debt of US$7.4bn in 2019! Yet, despite battles with activist investors over board member pay aside, CRH might be the rare producer that knows when to stop expanding. Notably in 2018 after an expansion phase, including acquisitions of Ash Grove Cement and LafargeHolcim assets previously, it publicly decided in 2018 to take a pause. There may be weaknesses in the company’s balance sheets yet to be revealed but they are not apparent using these metrics.

In summary, we’ve focused on corporate acquisitions here as the main source of debt in cement producers. This is simplistic but timing is everything when taking on a large amount of debt. Cemex is still carrying the scars from buying Rinker over a decade ago and InterCement and HeidelbergCement, to a lesser extent, are ones to watch through the next bad patch. Other things to consider are a general move to a more regional model for these producers away from a global one. UltraTech Cement’s focus on the Indian sub-continent or Dangote Cement’s work in Africa are examples of this. This approach could go wrong if the sole regions they operate in suffer disproportionately from the economic fallout from coronavirus. Or, if any producer, even one with high debts, has the good fortune to be present in a territory that suffers less from the downturn it may benefit. On a final note, it is worth mentioning that government data reports that China’s domestic cement production capacity utilisation in the two-week period ending on 10 April 2020 bounced back to 95% following the relaxation of the lockdown.

Last modified on 15 April 2020
Published in Analysis
Tagged under