Coronavirus and the Chinese cement industry

Data is starting to emerge about how the Chinese cement industry has coped with the economic effects of government action regarding the coronavirus. National cement industry output fell by 29% year-on-year to 150Mt in the combined months of January and February 2020. Output then picked up to 149Mt in March 2020, a drop of 17% compared to March 2019. These are massive figures, larger than the annual output of most countries, but they give some idea of what shutting down economies does to demand for cement and concrete. 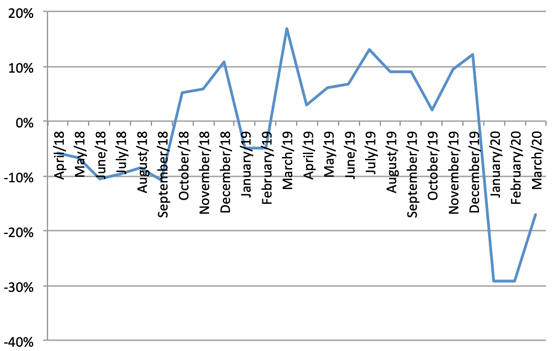 Graph 1: Year-on-year change in cement output in China, April 2018 - March 2020. Source: National Bureau of Statistics of China. Note that accumulated data is issued for January and February each year so these months show a mean figure.

Graph 1 above gives the general picture of changes in cement output in China over the last couple of years. Growth fell in early 2018 as the government implemented its supply-side reforms, including measures such as industry consolidation and peak shifting. This improved in the second half of the year and throughout 2019. January and February output has been steady for the last few years, possibly due to peak shifting, but this year the trend was massively more pronounced. In March 2020, meanwhile, output fell by 17% compared to a rise of 17% in 2019. On the demand side, reporting from the Chinese Cement Association reveals that national infrastructure investment (excluding electricity) decreased by 19.7% year-on-year in the first quarter of 2020. National real estate development investment fell by 7.7% to US$310bn.

The figures above are for the whole of China whilst the outbreak was centered in Wuhan in Hubei province. The government implemented its toughest public health measures in this city and the surrounding Hubei province, with other regions using social distancing and tracking methods to various degrees. The Chinese Cement Association explains that, once other cities in Hubei province were released from lockdown, construction projects were allowed to resume but that progress was limited due to a lack of workers. Three weeks after measures were relaxed, the average shipping rate for cement producers was only 60% in these outer regions. In Wuhan the situation was more stark with demand for cement at only 20% of expected levels at the time the lockdown ended on 8 April 2020. Data from the Hubei Cement Association reports that on 30 March 2020 only half of Hubei province’s 57 clinker production lines were producing cement. The rest were suspended. To compound the problems here once logistics networks started to reopen imports of cement from other provinces flooded in taking advantage of price differences.

Few if any of the larger domestic producers have released their first quarter financial results for the first quarter of 2020. Huaxin Cement has said that its sales fell by 36% and that this is expected to cause a profit drop of 46% year-on-year to US$100m. Shanshui Cement has said likewise, although it has not released any forecasts. In its annual report for 2019 released in early April 2020, Anhui Conch said that the coronavirus had exerted a ‘short-term negative impact’ on the group’s business due to the slowdown in supply and demand in the construction materials industry. CNBM also acknowledged the situation in its 2019 report saying that it would, ‘impact on economic activity.’ CNBM’s subsidiary BNBM, a gypsum wallboard manufacturer, has released a forecast for the first quarter predicting a 90% drop in net profit due to poor sale volumes.

How this can inform the cement industries of other countries around the world that have enacted restrictions on their populations is unclear. China, as ever, is an exceptional outlier both economically and as a cement producer. Plus, the severity of how a country enacts a lockdown is crucial here. If the early reports above are indicative then half of Hubei’s clinker lines were forced to suspend production, demand for cement fell by 80% at the time the lockdown ended and imports headed in once transport networks were reopened. Issues were also noticed with labour shortages. Forewarned is forearmed as they say. The next point of focus will be how fast the Hubei and Chinese cement industry recovers from this shock. More on this as we have it.

Last modified on 22 April 2020
Published in Analysis
Tagged under