There has been good news from the German Cement Works Association (VDZ) this week. Following a strong start to the year, the association expects cement consumption in 2020 to remain similar to the level, 28.7Mt, reported in 2019. VDZ president Christian Knell acknowledged the difficulty in making forecasts, this year of all years, but said that the association remained positive since demand had held up so well. He noted the continued operation of construction sites, despite the local coronavirus-related lockdown from March 2020, and the ‘quick action’ of politicians. 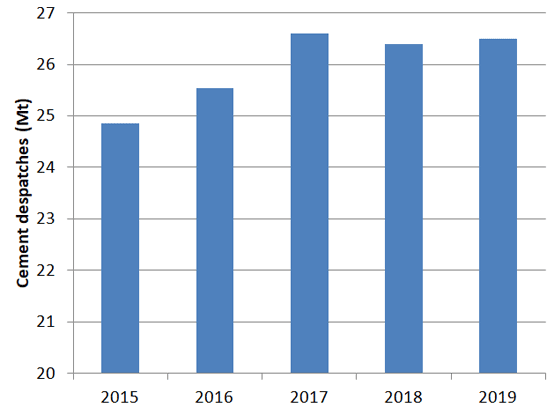 The year certainly started well, with a 33% year-on-year increase in domestic cement deliveries to 1.43Mt in January 2020 from 1.07Mt in January 2019. This was due in part to good weather, although it also looks good because 2019 started badly compared to 2018. Yet, the VDZ’s assessment has been supported by the results of the main producers operating in the country. HeidelbergCement reported that Germany bucked the trend of its Western and Southern Europe Group area in the first half of 2020 with a ‘positive market development’ whereas deliveries declined significantly everywhere else. Similarly, LafargeHolcim noted a ‘resilient’ performance in Germany. Buzzi Unicem released a more detailed assessment, with shipments of hydraulic binders down in April and May 2020 but then back up with a recovery in June 2020. Overall its cement plants reported a slight decline in sales for the first half of the year. Concrete production grew however, by 6% year-on-year, possibly aided by the plants that the group purchased in 2019.

Germany’s success appears to be down to two factors. The first, as Knell mentioned above, is that it was able to keep much of its construction industry open through its lockdown. Dieter Babiel, the head of Hauptverband der Deutschen Bauindustrie – the main German construction industry association - reckoned that the industry was operating at about 80% capacity in May 2020 compared to the situation in other large European countries like France, the UK, Spain and Italy where building sites totally closed at the height of local lockdowns before gradual reopening. Bauindustrie has since reported falling monthly order intake as coronavirus-effects on the general economy filter through to construction. The other reason is that the country has managed to control its outbreak better compared to other European countries. It has reported the third most cases in Europe but its fatality rate is only 4% compared to 14% in the UK, Italy and France. This has been attributed to strong public health measures and high levels of testing, particularly with respect to elderly residential care.

It’s not all plain sailing though since the International Monetary Fund (IMF) has projected a 7.8% decline in Germany’s gross domestic product (GDP) in 2020. Likewise, the VDZ is predicting weakening construction markets and cement demand in the fourth quarter of 2020. It cited falling orders and requests for building permits as mounting evidence for this trend. From here a gloomier outlook is foreseen for 2021 as construction budgets for commercial and government projects are cut. At the same time uncertainty in the labour market is expected to drag down the residential market. With this in mind the VDZ is predicting cement demand to drop by 3 – 5% in 2021.

To end on an upbeat note, if the VDZ’s forecasts are accurate, then the German cement sector looks like it might weather the coronavirus-downturn better than other industries. It knows a downturn in construction is coming and it can prepare for it.

Last modified on 12 August 2020
Published in Analysis
Tagged under