Ed Sullivan was present to tell Global Cement Live viewers about the Portland Cement Association’s (PCA) autumn forecast last week. The PCA expects US cement consumption to drop by 1.5% year-on-year on 2020. This is a weighted average of its three projections, which cover a gradual recovery from coronavirus-related economic disruption, a less controlled scenario and one where wide-spread vaccination has a positive effect in the second half of 2021. The first scenario is the PCA Market Intelligence’s most likely one but only the fast vaccination scenario predicts a return to growth in 2021. This is wide but understandable deviation from the PCA’s autumn forecast in 2019 that expected moderate growth albeit a slowly weakening economy. Almost nobody seriously expected 2020 to turn out like it has. Follow the link at the bottom of this article to view the presentation in full. 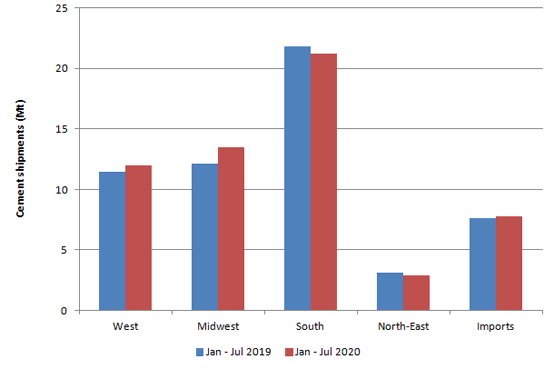 We’ll now take a general look at the US cement industry so far in 2020 to compliment Sullivan’s economic overview. Up until 2020 cement consumption, production and imports had been growing steadily since the financial crash in 2008. Using August 2020 data the PCA says this is changing. Graph 1 above shows a general reverse of the position in the autumn of 2019 [LINK] with declines in the South and North-East and growth in the West and Midwest. Imports alongside this have continued to build. Overall, national cement shipments increased by 2.2% year-on-year to just under 50Mt in January to July 2020 from 48.9Mt in the same period in 2019. This was driven by growth of 10.8% in the Midwest. Missouri is the standout in the region, behind only Texas and California nationally as the third biggest cement shipping state so far in 2020.
From the corporate side, LafargeHolcim, the US’ biggest cement producer, described North America as having, “…the most resilience of all regions despite Covid-19 restrictions in some areas.” It reported an overall fall in cement volumes of 1.4% year-on-year to 8.9Mt in the first half of 2020. However, it didn’t go into specifics for the US. Cemex’s experience seemed to be doing better with an 8% rise in cement volumes supported by the infrastructure and residential sectors. HeidelbergCement went further and described the impact of coronavirus on the US economy as ‘significant.’ It reported a decrease in cement deliveries at its North American plants of 4.9%, to 7.1Mt. Both Buzzi Unicem and CRH reported cement sales growth of 4 – 5%, with CRH noting that, “strong volume trends in West supported by growth in our downstream businesses drove performance.”

Perusing the industry news reveals a slew of environmental stories. So far in 2020, Holcim US said it was going to run a carbon capture and storage (CCS) study at its Portland cement plant in Colorado, Alamo Cement signed a deal to build a solar farm, Grupo Cementos de Chihuahua’s (GCC) Rapid City plant in South Dakota announced plans for a wind farm, CalPortland launched a sustainable product line with a lower clinker factor, LafargeHolcim launched its ECOPact low-carbon concrete range, LafargeHolcim US also said it was adopting new environmental product declarations and Holcim US opened a solar power plant at its Hagerstown cement plant. There have been a few upgrade stories, like the new line being built at National Cement’s Ragland plant in Alabama or Lhoist’s new lime kiln projects, but Lehigh Hanson said it was suspending work on the upgrade to its Mitchell plant in Indiana in April 2020.

At this point all eyes are on the US Presidential election scheduled to run on 3 November 2020. Donald Trump’s long promised but never delivered infrastructure still hasn’t arrived although blame could be apportioned to both sides of the local political divide for this. The PCA believes that both presidential candidates will probably see it through although the Republicans’ interpretation might well involve more cement! In the interest of balance though, it also expects the Democrats to focus on low-income housing construction. At this stage it seems more likely that the early arrival of a coronavirus vaccine will have more impact on the cement industry in the short to medium term than the results of the election.