2020 has been a year like no other and this clearly shows in the financial results of the major cement producers so far.

The first jolt is that several major Chinese cement producers have seen their sales fall. Following a tough first quarter due to coronavirus, the Chinese industry then overcame floods in the summer, to eventually report a decrease in cement output of 1.1% year-on-year to 1.68Bnt in the first nine months of 2020. The world’s largest cement producer, CNBM, reported a slightly smaller drop in sales year-on-year in the first nine months of 2020. This relatively small fall, just below 1%, may be due to CNBM’s size and diversity of business interests. Other large Chinese producers have noted bigger losses, such as Huaxin Cement’s 9% sales decline to US$3.04bn and Jidong Cement’s 5% sales fall to US$3.8bn. However, Anhui Conch actually saw a 12% rise in sales to US$18.7bn. 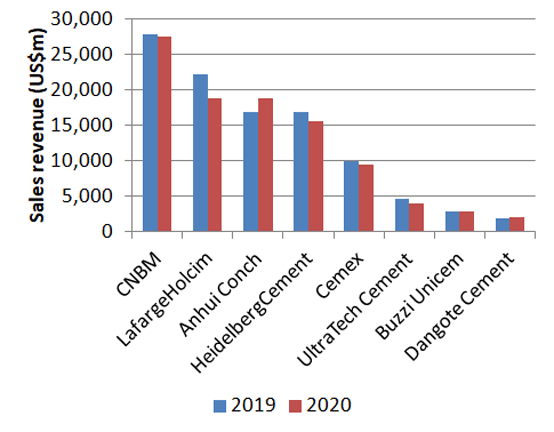 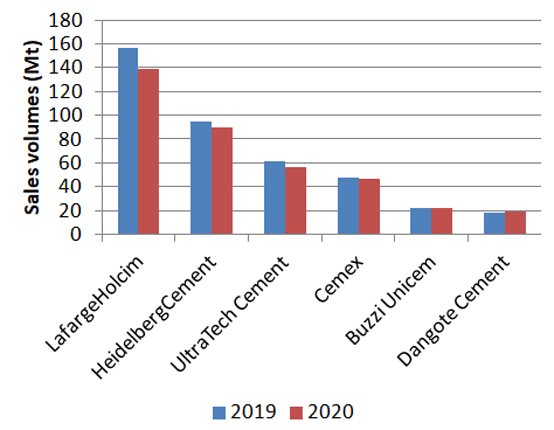 LafargeHolcim’s sales look worse in Graph 1 than they really are because the group was busy divesting assets in 2019. Its net sales fell by 7.9% on a like-for-like basis to US$18.7bn in the first nine months of 2020, a rate of change similar to HeidelbergCement’s. Being a properly multinational building materials producer brings mixed benefits given that these companies have suffered from coronavirus-related lockdowns in different times in different places but they have also been able to hedge themselves from this effect through their many locations. In the third quarter of 2020, for example, LafargeHolcim was reporting recovering cement sales in its Asia-Pacific, Latin America and western/central parts of its Europe regions but problems in North America. Again, HeidelbergCement noted a similar picture with cement deliveries up in its Africa-Eastern Mediterranean Basin Group area, stable in Northern and Eastern Europe-Central Asia and down elsewhere. How the latest round of public health-related lockdowns in Europe round off a bad year remains to be seen.

The other more regional producers are noteworthy particularly due to their different geographical distribution. Cemex has seen a lower fall in sales revenue and cement sales volumes so far in 2020, possibly due to its greater presence in North America. What happens in the fourth quarter is uncertain at best, with US coronavirus cases rising and the Portland Cement Association (PCA) expecting a small decline in cement consumption overall in 2020. Along similar lines, Buzzi Unicem appears to have benefitted from its strong presence in Germany and the US, leading it to report a below 1% drop in sales revenue so far in 2020, the lowest of the decreases reported here for the western multinational cement companies.

Looking more widely, UltraTech Cement, India’s largest producer, had to contend with a near complete government-mandated plant shutdown in late March 2021. The figures presented here are calculated for comparison with other companies around the world due to the difference between the standard calendar financial year (January to December) and the Indian financial year (April to March). However, they suggest that Ultratech Cement suffered a 14% fall in sales to US$3.9bn and an 8% decline in sales volumes to 56Mt, among the worst decline of all the companies featured here. This is unsurprising given that UltraTech mostly operates in one country. Sure enough it bounced back in its second quarter (June – September 2020) with jumps in revenue, earnings and volumes.

Finally, for a view of a region that hasn’t had to face coronavirus-related economic disruption of anything like the same scale, Dangote Cement has reported solid growth so far in 2020, with rises in sales and volumes both above 5%. Economic problems at home in Nigeria have seen relatively higher growth elsewhere in Africa in recent years but now the pendulum has swung back home again. The big news has been that the company has pushed ahead with plans to turn Nigeria into a cement export hub, with a maiden shipment of clinker from Nigeria to Senegal in June 2020. The vision behind this has expanded from making Nigeria self-sufficient in cement from a few years ago into making the entirety of West and Central Africa cement and clinker ‘independent.’

The big news internationally this week was of the reported effectiveness of a Covid-19 vaccine in early trials by Pfizer and BioNTech. It might not yet make it into people’s arms at scale but it shows that the vaccine appears to work and that others in development and testing may do too. Building material manufacturer share prices didn’t rally as much as airlines or cinema chains on the news, construction has carried on after all, but this is a positive sign that normality for both health and wealth is on the way back at some point in 2021. One point to consider, given the wide regional variation with the economic effects of coronavirus, is what effect a disjointed global rollout of a vaccine or vaccines might have. A building material manufacturer dependent on a region that stamps out the virus later than other places might face an economic penalty. Recovery seems likely in 2021 but it isn’t guaranteed and the implications of the coronavirus crisis seem set to persist for a while yet. Here’s hoping for a different outlook at this point in 2021.