2020 roundup for the cement multinationals

LafargeHolcim’s financial results for 2020 arrived this week, giving us data on many of the larger multinational cement producers. The Chinese ones are yet to release their results and some of the larger other ones such as CRH, Votorantim and InterCement are pending too. Yet, what we have so far gives a selective view on an unusual year. Revenue was down for most producers year-on-year in 2020 due to the effects of the coronavirus pandemic upon construction activity and demand for building materials. There were large regional differences between how countries implemented different lockdowns, how markets responded and how they bounced back afterwards. Generally, the financial effects of this were felt in the first half of 2020 with recovery in the second. 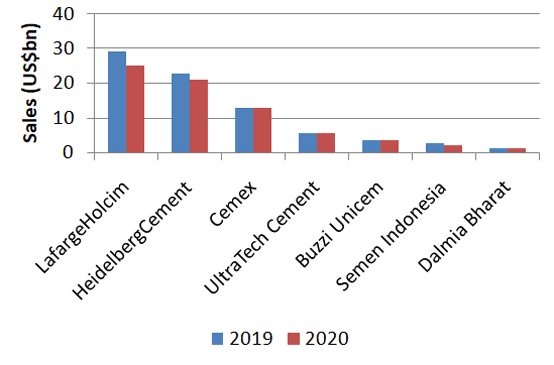 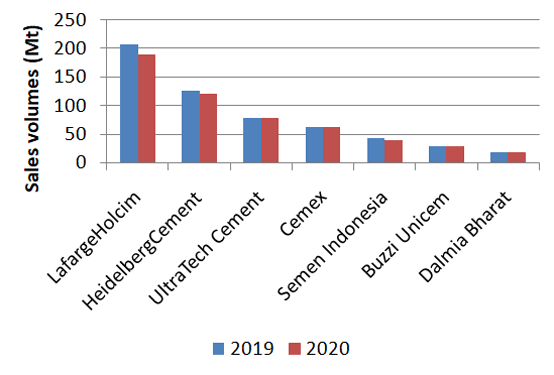 LafargeHolcim’s figure in Graph 1 above is a little misleading given that it has divested assets. Its like-for-like reduction in net sales was more like 6%, a similar figure to HeidelbergCement’s. Both experienced mixed results in North America and Europe but not terribly so. LafargeHolcim did relatively well in Latin America. HeidelbergCement found growth in its Africa-Eastern Mediterranean Basin region. It’s also worth noting the comparative leverage of each company: 1.4x for LafargeHolcim and 1.86x for HeidelbergCement. Both are slimming down but the latter’s ongoing divestment plan (see GCW 494) can be seen in the context of its debt to earnings ratio and the cash crisis that coronavirus threw up in 2020.

The contrast between these companies and Cemex and Buzzi Unicem is striking. Both of these benefitted from operations in the North America and parts of Europe. In Cemex’s case sales in Mexico and the US, made the difference despite falling sales elsewhere. Buzzi Unicem’s sales also held up in the US especially in the second half of the year. Europe was more mixed for both producers with growth reported in Germany but losses elsewhere.

The Indian producers tell a different story but one no less notable. Despite a near complete shutdown of production for around a month from late March 2020, the regional market largely recovered. As UltraTech Cement told it in January 2021, “Recovery from the Covid-19 led disruption of the economy has been rapid. This has been fuelled by quicker demand stabilisation, supply side restoration and greater cost efficiencies.” It added that rural residential housing had driven growth and that government-infrastructure projects had helped too. It expects pent-up urban demand to improve with the gradual return of the migrant workforce.

Unfortunately, Semen Indonesia, the leading Indonesian producer, suffered as the country’s production overcapacity was further hit by scaling back of government-based infrastructure projects as it tackled the health situation instead. Its solution has been to focus on export markets instead with new countries including Myanmar, Brunei Darussalam and Taiwan added in 2020 joining existing ones such as China, Australia and Bangladesh. The company’s total sales volumes may have fallen by 8% year-on-year to 40Mt in 2020 but sales outside of Indonesia, including exports, grew by 23% to 6.3Mt.

On a final note it’s sobering to see that the third largest seller of cement in this line-up was UltraTech Cement, a mainly regional producer. Regional in this sense though refers to India, the world’s second largest cement market. By installed production capacity it’s the fifth largest company in the world after CNBM, Anhui Conch, LafargeHolcim and HeidelbergCement. This move towards regionalisation among the large cement producers can also be seen in the large western-based multinationals as they are heading towards fewer but more selective locations. More on the world’s largest producer, China, when the producers start to releases their financial results towards the end of March 2021. Whatever 2021 brings, let’s hope it’s better than 2020.

Last modified on 03 March 2021
Published in Analysis
Tagged under