Global Cement Weekly celebrates its 500th edition this week. This corresponds to nearly a decade’s worth of news and comment upon the cement industry, since the first edition went out in early June 2011. Time is brief, so the quick version of all of this is as follows: China; production growth; production overcapacity; grinding; corporate mergers; regionalisation; CO2; digitisation; and coronavirus.

Those looking for the longer version should read Peter Edwards’ review of the 2010s in the December 2019 issue of Global Cement Magazine. Although be warned, few were expecting a global pandemic to rock markets and possibly hasten future trends when that article was written. Those looking for the even longer version should read the last 10 years of the magazine and the website… and then let us know what we missed.

Looking back at the first few editions of Global Cement Weekly brings to mind the LP Hartley quote, “the past is a foreign country; they do things differently there.” It’s all very familiar until one comes across the little things that makes one realise how much has actually changed.

For example, countries were imposing import tariffs on cement, companies were buying each other, national cement associations were lobbying hard for their members and cement plants were investing in alternative fuels equipment. All that stuff has been happening continually over the last decade and right into this week, with Russian media announcing who has won the auction to buy Eurocement and LafargeHolcim closing its deal to buy Firestone Building Products. Yet, Lafarge and Holcim were still separate companies and Italcementi was independent in 2011. On the sustainability side, Norcem and its parent company HeidelbergCement Group, with the European Cement Research Academy (ECRA), had just started a partnership agreement with Aker Clean Carbon (ACC) to study post-combustion CO2 capture technology at Norcem’s plant in Brevik, Norway. Jump forward nine years and Norcem signed a deal with Aker Solutions in mid-2020 to order a full scale CO2 capture, liquification and intermediate storage plant at Brevik.

The big numbers from the United States Geological Survey (USGS) show that global cement production grew by 24% to 4.1Bnt in 2020 from 3.3Bnt in 2010. However, the big growth had stopped by around 2013 and production has hovered between 4.0Bnt/yr and 4.2Bnt/yr ever since. Alongside this, Getting the Number Right (GNR) data indicates that net CO2 emissions for cementitous products fell by 4% to 610kg/t in 2018 from 636kg/t in 2010. The former may show a levelling off of production as the Chinese market stabilised in the 2010s but the latter shows the progress that has been made in reducing cement-related CO2 emissions and the scale of the challenge that remains ahead. 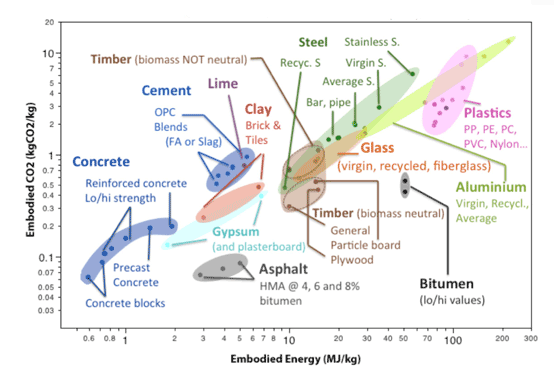 Cement industry readers should not lose heart about the future of the industry though, while environmental pressure continues to mount. Graph 1 above shows the embodied CO2 and energy of common building materials. Cement has been rightly identified as a major emitter of CO2 but any society that desires to build strong structures cheaply and at scale requires concrete to do so whilst the data above remains unchallenged. The ratios may change, such as the perennial energy-cost influenced tug-of-war between asphalt and concrete roads, but concrete remains the only game in town. For now. At which point cement production becomes all about reducing the CO2 emissions or capturing them, and determining who exactly pays for this. This then brings us to the present with the European Union Emissions Trading Scheme carbon price of over Euro40/t and other schemes popping up all around the planet. One echo from one of the early editions of Global Cement Weekly was the furore over Australia’s attempt at a carbon tax in the early 2010s. It was repealed in 2014.

One prediction about how the 2020s might be summarised for the cement industry is this: how to get away with pumping out all that CO2? Let’s see what the next decade will bring.

Last modified on 07 April 2021
Published in Analysis
Tagged under