Two news stories merit a closer look at Argentina this week. Firstly, Loma Negra fired up the kiln on its new 2.7Mt/yr production line at the L’Amalí cement plant in Olavarría. Work on the US$350m started in 2017 but was delayed due to the coronavirus pandemic. Notably, engineers from China-based Sinoma International Engineering, who built the plant, caused a stir when they arrived in Argentina in full personal protective equipment in late 2020 to continue work on the project. Full commissioning of the second line at the plant is scheduled for July or August 2021.

Almost at the same time, the Argentine government announced it had persuaded local building materials producers to stick to reference prices for construction materials, including cement, in order to control inflation. Loma Negra, Cemento Avellaneda and Petroquímica Comodoro Rivadavia (PCR) were said to be on board with the ‘voluntary’ plan. Building materials prices generally were reported to have risen 85% year-on-year in May 2021 compared to a national inflation rate of 49%. The new arrangement is planned to last until the end of 2021 with revisions to the reference prices every two months. 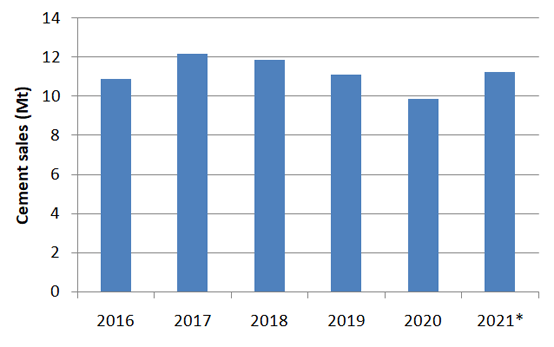 Data from the Asociación de Fabricantes de Cemento Portland (AFCP) doesn’t show any obvious signs of disruption from inflation so far in 2021. Cement sales grew by 50.5% year-on-year to 4.55Mt in the five months to May 2021 from 3.02Mt in the same period in 2020. The cement market in Argentina didn’t shut down but it hit a low of 0.41Mt in April 2020 before compensating with a strong second half of the year, most likely due to pent-up demand as the economy reopened following local coronavirus-related lockdowns. At the time of writing the AFCP has forecast that cement sales will reach 11.3Mt in 2021, a slight rise over the 11.1Mt reported in 2019, when the market was more stable. However, cumulative sales to May 2021 are slightly behind similar sales in 2019.

Loma Negra’s upgrade at its L’Amalí plant follows Holcim Argentina’s inauguration of a new 0.5Mt/yr clinker production line at its Malagueño cement plant in Cordoba in May 2021. This project also added a 0.63Mt/yr cement grinding unit at the site as well as a new 120,000 bag/day despatch unit. Altogether it had a price of US$120m. This followed the announcement in late April 2021 that the subsidiary of LafargeHolcim was planning to open 1000 new branches of its Disensa retail chain in the country by 2024.

Loma Negra reported a 13% drop in sales to US$436m in 2020 from US$500m in 2019. However, its adjusted earnings before interest, taxation, depreciation and amortisation (EBITDA) rose by 3% to US$139m from US$136m. This was partly aided by the sales of its Paraguayan operations during 2020. At face value, Cemento Avellaneda had a tougher time of its in 2020 with its sales down by 22% to Euro111m and EBITDA down by 9% to Euro37m. However, once adjusted on a like-for-like basis with constant currencies and without a hyperinflation adjustment, its sales and earnings actually rose by 22% and 45% respectively.

Holcim Argentina’s director Christian Dedeu was interviewed by national news agency Télam in May 2021 around the time of the upgrade at the Malagueño cement plant was officially completed. When asked by the company had made the investment he said that the country had potential for both the residential and infrastructure sectors. He also pointed out that the subsidiary of Switzerland-based LafargeHolcim had been forced to import clinker at times of high demand previously. The announcements for both the Loma Negra and Holcim Argentina new lines were made at the end of 2017 when the market hit a high in sales volumes. Since then the country has faced rocketing inflation, further delays to it debt repayment programme to the International Monetary Fund (IMF) and the coronavirus pandemic. Producing more commodities, such as clinker, domestically certainly seems enticing with high inflation and unfavourable foreign currency exchange rates. So, the new production lines from Loma Negra and Holcim Argentina are well timed in this sense unless they get hit by any mounting input costs, from imported raw materials for example. On the other hand the government’s measures to curb inflation such as reference prices for cement may constrain the cement producers’ flexibility. As the local construction industry slowly recovers after 2020, continued uncertainty lies ahead.

Last modified on 29 June 2021
Published in Analysis
Tagged under