It’s time for a macroscopic view of the Chinese cement sector this week with the release of the half-year financial results by some of the larger Chinese cement producers. On the national level the picture so far in 2021 has been one of continued recovery from the coronavirus lockdowns at the start of the year and then a slowing market as state controls on real estate speculation started to take effect. However, poor weather in the spring and mounting raw material prices appear to have compounded the effects of the real estate regulations, leading to price falls.

Cement output data from the National Bureau of Statistics of China in Graph 1 shows that local production took a knock in the first quarter of 2020 due to the coronavirus pandemic and this strongly recovered in the same period in 2021. The market recovered fast in mid-2020 and so the year-on-year growth for the second quarter was less in 2021. Output on a monthly basis remained ahead year-on-year from April 2020 and stayed ahead until May 2021. However, output in June 2021 was behind the figure in June 2020 and the figure for July 2021 was behind both July 2020 and July 2019. 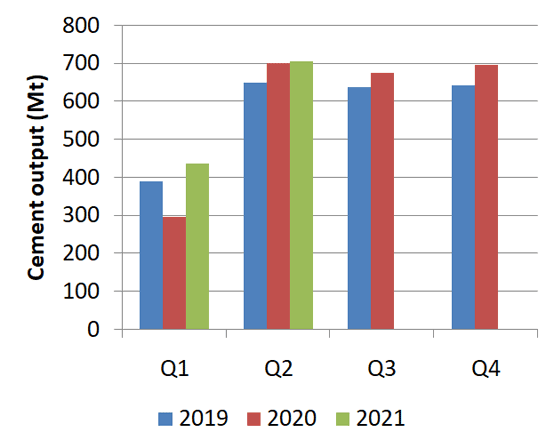 The Chinese Cement Association (CCA) was lamenting falling cement prices at the start of July 2021. It blamed the situation on slowing infrastructure development in some regions, increasing government restrictions on real estate development, especially poor mid-year weather and higher input prices such as for steel. China Resources Cement (CRC) expanded upon the point about increasing real estate regulations in its financial results for the first half of 2021 explaining that the Chinese government has been promoting a policy that aims to ensure that “residential properties are not for speculation” including controls on the financing of real estate. Later in mid-August 2021 the CCA reported that prices were recovering in east and central-southern regions although the situation remained poor in Guizhou province with shipments down to 60% of normal levels. Production control measures are expected to be implemented to stabilise the situation. 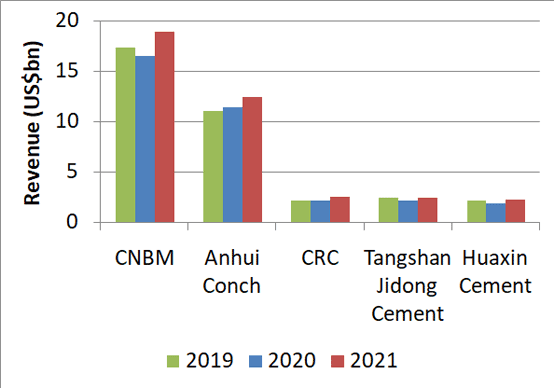 On the corporate side the sales revenue from some of the large Chinese cement producers mostly show the usual gap-tooth pattern that coronavirus has created everywhere as the market recovered. Notably Anhui Conch managed to avoid falling sales year-on-year in the first half of 2020. However, the CCA’s observation above about rising input costs is visible in the falling profits of some (but not all) of the companies covered here. For example, Anhui Conch’s net profit fell by 7% year-on-year to US$2.32bn in the first half of 2021. It blamed this on a significant rise in the price of raw coal. CRC also reported falling profits attributable to increased production costs.

CNBM reported an increase to cement and clinker sales volumes of 7.6% to 177Mt and concrete sales volumes by 13.4% to 52Mm3. It noted that, “In the first half of 2021, the national cement market showed the characteristics of high price level fluctuation adjustment.” From January to April 2021 local fiscal policy boosted demand for cement but from May 2021 continuous heavy rainfall and increasing bulk commodity prices slowed infrastructure project development. Anhui Conch’s cement and clinker sales volumes for both production and trading grew by 11.5% to 208Mt. It reported stable market demand in eastern, central and southern regions but noted falling prices in the west.

Looking ahead, two issues, among many, to consider are carbon trading and imports. The former has been coming for a while and was launched formally online nationally in mid-July 2021 for the power generation industry. The carbon price was nearly Euro7/t in late July 2021 in China compared to around Euro53/t in the European Union. Cement and steel are expected to join the Chinese national scheme in the next phase although analysts believe that issues such as data gathering, permit allocation rules, accounting standards, sector reduction targets and related financial support all need to be improved before this can happen. Imports are a connected issue and it has been interesting in recent months to hear financial analysts point out the risks, for example, of major exporting nations such as Vietnam relying on China so much. The CCA reckons that China imported 33.4Mt of clinker in 2020, an increase of 47% year-on-year, with 60% of this derived from Vietnam. With the Chinese government trying to tackle cement production overcapacity and meet growing environmental targets, imports look set to become a ‘hot ticket’ issue. In this context it is telling to see talk from the CCA of ensuring standards for imports such as verified carbon emissions. Naturally, the imports that could be trusted the most will probably be the ones from plants that Chinese cement producers have built themselves overseas. As waste importers into China found out previously, relying heavily on one market with strong state controls carries considerable risks. Cement exporters in South-East Asia take note.

Last modified on 03 September 2021
Published in Analysis
Tagged under