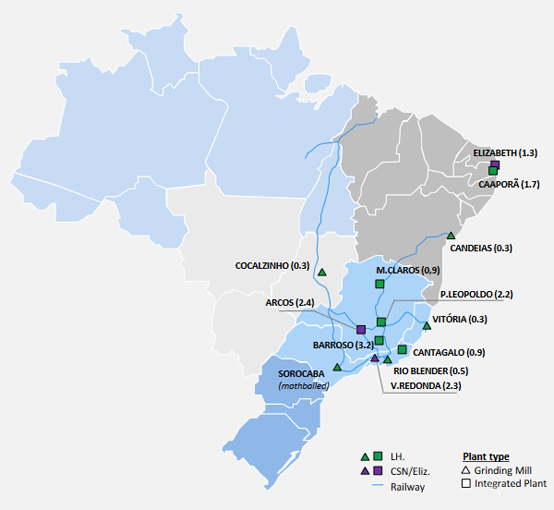 CSN originally started out in steel production and this remains the major part of its operations to the present day. In 2020 it reported revenue of US$5.74bn. Around 55% of this came from its steel business, 42% from mining, 5% in logistics and only 3% came from its cement segment. CSN’s path in the cement sector started in 2009 when it started grinding blast furnace slag and clinker at its Presidente Vargas Plant at Volta Redonda in Rio de Janeiro state. It then started clinker production in 2011 at its integrated Arcos plant in Minas Gerais. Not a lot happened for the next decade, publicly at least, as the country faced an economic downturn and national cement sales sunk to a low in 2017. From around 2019, CSN Cimentos then started talking about a number of new proposed plant projects elsewhere in Brazil, dependent on market growth and an anticipated initial public offering (IPO). These included plants at Ceará, Sergipe, Pará and Paraná and expansion to the existing units in the south-east. Then CSN Cimentos agreed to buy Cimento Elizabeth for US$220m in July 2021.

It is worth noting that the Holcim acquisition is subject to approval by the local competition authority. For example, the Cimento Elizabeth plant and Holcim’s Caaporã plant are both in Paraíba state and within about 30km of each other. If approved, this would give CSN Cimentos two of the four integrated plants in the state, with the other two operated by Votorantim and InterCement respectively. CSN also stands to pick up four integrated plants in Minas Gerais from Holcim to add to the one it holds at present. Although this would seem to be of less concern due to the high number of plants in the state.

Holcim has made a point of saying that its divestment in Brazil is part of its strategy to refocus on sustainable building solutions with the proceeds going towards its Solutions & Products business following the Firestone acquisition that completed in early 2021. It has also stated previously that it wants to concentrate on core markets with long term prospects. In this context a major steelmaker like CSN diversifying into cement is a contrast. Both industries are high CO2 emitters so CSN is hardly moving away from carbon-intensive sectors. Yet the two have operational, economic and sustainability synergies through the use of slag in cement production. This puts CSN Cimentos in company with Votorantim in Brazil and JSW Cement in India, two other steel manufacturers that also produce cement. Whatever else happens at the 26th United Nations Climate Change conference (COP26) in November 2021, it seems unlikely that global demand for steel or cement is likely to be significantly reduced. CSN Cimentos is now going to resume its IPO of shares to raise funds for the Holcim acquisition.

Acquisitions are all about timing. The CSN Cimentos-Holcim deal follows the purchase of CRH Brazil by Buzzi Unicem’s Companhia Nacional de Cimento (CNC) joint-venture earlier in 2021. As mentioned above, the cement market in Brazil has been doing well since it started recovering in 2018. The coronavirus pandemic barely slowed this down due to weak lockdown measures compared to other countries. The current run of sales growth may be tapering off based on the latest National Cement Industry Association (SNIC) figures for August 2021. Rolling annual totals on a monthly basis had been growing since mid-2019 but this started to slow in May 2021. Annual sales will be up in 2021 based on the figures so far this year but after that, who knows? A CSN investors’ day document in December 2020 predicted, as one would expect, steady cement consumption growth in Brazil until at least 2025, based on correlated forecast growth in the general economy. Yet fears of inflation, rising prices and political uncertainty ahead of the next general election in late 2022 may undermine this. InterCement, for example, cancelled a proposed IPO in July 2021 due to low valuations amid investor uncertainty. CSN Cimentos may encounter similar issues with its own planned IPO or face over-leveraging itself when it picks up the tab for LafargeHolcim Brazil. Either way, CSN decided to take the risk on its path to becoming Brazil’s third largest cement producer.