Most of the producers have blamed negative currency effects for their falls in revenue during the first half of 2016. Holding a mixed geographical portfolio of building materials production assets has kept these companies afloat over the last decade but this has come with a price. The recent appreciation of the Euro versus currencies in various key markets, such as in Egypt, has hit balance sheets, since the majority of these firms are based in Europe and mostly use the Euro for their accounting. Meanwhile, sales volumes of cement have mostly risen for the companies we have examined making currency effects a major contributor. 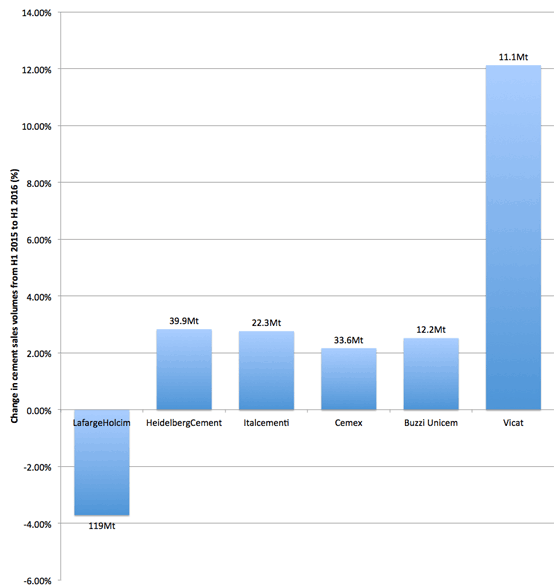 As can be seen in Graph 1, sales volumes have risen for most of the producers, with the exception of LafargeHolcim. Despite blaming shortages of gas in Nigeria for hitting its operating income, LafargeHolcim actually saw its biggest drop in sales volumes in Latin America by 13.2% year-on-year to 11.8Mt. The other surprise here was that its North American region reported a 2.7% fall to 8.8Mt with Canada the likely cause. Vicat deserves mention here for its giant boost in sales volumes due to recovery in France and good performance in Egypt and the US, amongst other territories. 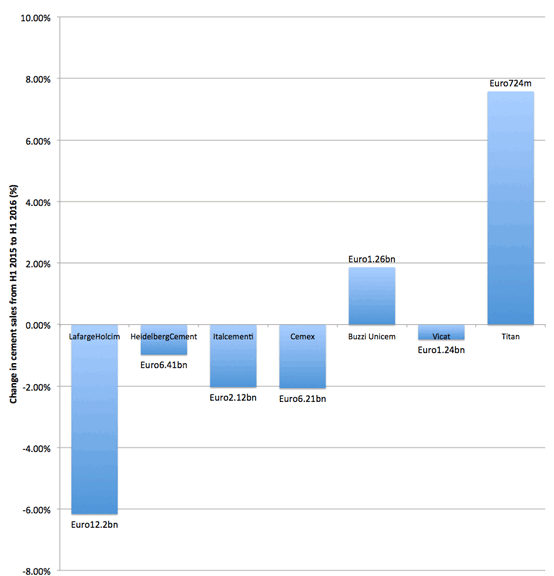 Overall sales revenue for these companies presents a gloomier scenario with the majority of them losing revenue in the first half of the year, with most of them blaming negative currency effects for this. Titan is included in this graph to show that it’s not all bad news. Its growth in revenue was supported by good performance in the US and Egypt. Likewise, good performance in Eastern Europe and the US helped Buzzi Unicem turn in a positive increase in its sales revenue. They remain, however, the exception.

Looking at sales revenue generated from cement offers one way to disentangle currency effects from performance. Unfortunately, only about half of the companies looked at here actually published this for the reporting period. Of these, LafargeHolcim reported a massive rise that was probably due to the accounting coping with the merger process that finalised in 2015. Of the rest - HeidelbergCement, Italcementi and Vicat – the sales revenue from each company’s cement businesses fell at a faster rate than overall sales. Like-for-like figures here would help clarify this situation.

Meanwhile, a mixed global patchwork of cement demand is focusing multinational attention on key countries with growing economies like Egypt and Nigeria. Both of these countries have undergone currency devaluation versus the Euro and are facing energy shortages for various reasons. The exposure of the multinational cement producers to such places may become clearer in the second half of the year.

Last modified on 10 August 2016
Published in Analysis
Tagged under