The All Pakistan Cement Manufacturers Association (APCMA) struck a triumphant note this week as it announced that its industry has over 26Mt/yr of capacity upgrades in the pipeline. Its chairman Sayeed Saigol concluded in a press release that the country’s growth trend required ‘massive’ investment and that its producers were working on it. 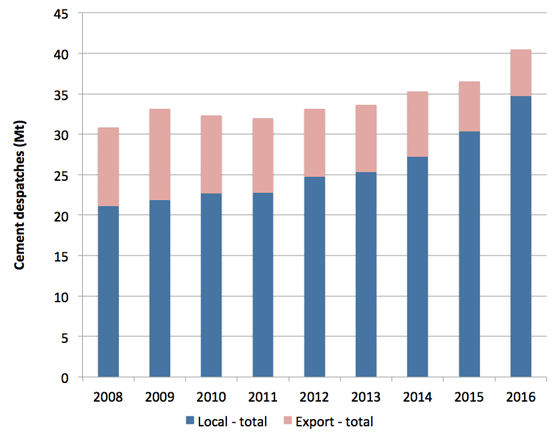 Graph 1 shows how the local industry has changed since 2009. At this time exports hit a high of over 11Mt, constituting 34% of all cement despatches at the time. Since then though exports have fallen to below 6Mt or 14% of despatches, as local despatches have started to increase. Although local despatches have risen each year, the growth rate was below 1% in 2011. In 2016 it was over 14%.

Much has changed since 2010. At this time production capacity hit a high of 45Mt/yr in the 2009 – 2010 Pakistan financial year, according to APCMA data, but then utilisation sunk to below 73%, its lowest rate in over a decade. Pakistan’s cement producers sought a way out by exporting their cement. Export volumes subsequently exploded to a high of nearly 11Mt in 2008 – 2009 from next to nothing at the turn of the millennium.

The effects of this had particular repercussions in eastern and southern Africa as local producers suffered against seaborne imports. In 2012 the outgoing chief of South Africa’s PPC summarised the problem by saying that imports were not a threat to African expansion, provided that a cement plant was not built within 200km of a port. Rightly or wrongly cement from Pakistan was vilified by the African press and then legislated against. South Africa even implementing anti-dumping duties to howls of derision from Pakistan.

Funnily enough though the APCMA has recommended that Pakistan’s government do exactly the same thing against imports of cement from Iran. Industry scare stories about Iranian cement being sold illegally in Pakistan have circulated since at least 2012. Iran’s nuclear deal in 2015 must have worried the local industry, as the prize for Iran was the lifting of international sanctions making it easier for one of the world’s largest cement producers to start exporting its product. However, president-elect Trump’s disdain for the Iran deal may put those worries to rest if the deal is ‘cancelled’.

Back to the present, the Pakistan cement industry appears to be booming. One motor is the China–Pakistan Economic Corridor, a collection of infrastructure projects worth US$54bn. There is some disagreement at this point about how the usage levels of cement breakdown, with the chief executive of Thatta Cement placing it at 60% for infrastructure and 40% for housing but with other commentators placing it at 70% for housing and 30% for infrastructure. If the latter is true then Pakistan’s cement producers may receive an even bigger payday. The emphasis on housing shouldn’t be underestimated though as the country’s production capacity per capita, below 200kg/capita, is low by international standards. Either way, things are looking good for the local producers.