2017 is an anniversary year for the French cement industry as it marks the bicentenary of Louis Vicat’s pioneering work into the creation of ‘artificial’ cement. The company that bears his name, Vicat, is a major force in the global cement industry to this day. However, the French industry has suffered since the global financial crash in 2007, with steadily declining production volumes, despite a bounce in 2011. Lafarge was only able to maintain its international status through a merger with Switzerland’s Holcim in 2015 and the arguments surrounding that ‘merger of equals’ are still playing out now with the resignation of the group’s chief executive officer in April 2017. 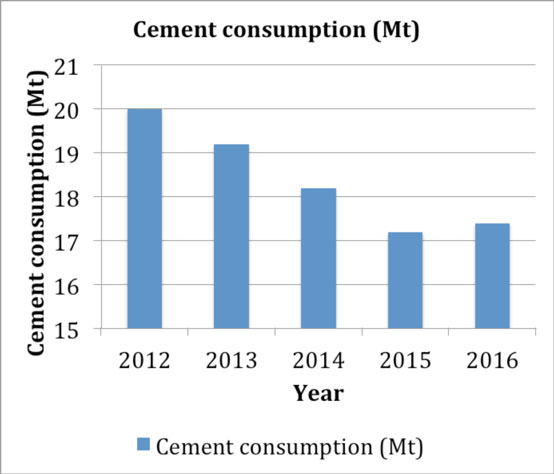 Thankfully, the industry started to recover in 2016 and the signs are positive that this will continue into 2017 with the presidential elections concluded. Graph 1 shows the situation since 2012.

Sensing the rebound in 2016 the head of the French building federation (FFB) placed growth in construction materials volumes at 1.9% in December 2016 with a forecast of 3.4% in 2017 based on new residential housing. Naturally he used his position to lobby the politicians in the run-up to the election and the FFB have carried on in this vein haranguing the new administration with 112 (!) proposals to ‘rebuild’ France.

The major cement producers broadly agreed with the outlook in 2016 with LafargeHolcim describing the local construction sector as growing ‘slightly’ despite subdued public spending on infrastructure and HeidelbergCement concurring. Vicat was more effusive pointing to its 6% rise in sales volumes to 2.9Mt in the domestic and export markets. It pinned the recovery down to the last quarter of 2015. However, it noted that the rise in volumes had compensated for a fall in prices due in part to the increased exports. On this point, although it’s outside the scope of this column, it would be fascinating to know how much the European Union Emissions Trading Scheme is stoking the French cement indsutry’s recovery through exports (see GCW290).

Investment has been returning to the market though with Ecocem France’s order of a Loesche mill for a slag cement mill it is building Dunkirk, the inauguration of a new tyre recycling unit at Lafarge France’s Martres plant and the start of a gasifier project at Vicat’s Crechy plant in 2016. More recently Lafarge France reported to the French press in May 2017 that it was starting to consider contractors for a new production line at the Martres plant, leading to fears that it might choose a Chinese provider.

So far in 2017 the situation is on a knife-edge with LafargeHolcim, HeidelbergCement and Vicat all reporting slight declines in sale volumes or earnings that they have blamed on the weather. However, LafargeHolcim did mention growing momentum towards the end of the period offering some hope. As seen above the fundamentals for the French cement industry are all ready and present for growth. Now with the pro-business Euro-centric new president installed in office the industry should be about to flower in time for Louis Vicat’s anniversary.