Plenty to mull over this week in Cembureau’s newly published Activity Report for 2016. The association pulls together data from a variety of places including its own sources, Eurostat and Euroconstruct. For competition reasons much of it stops in 2015 but it paints a compelling picture of a continental cement industry starting to find its feet again. 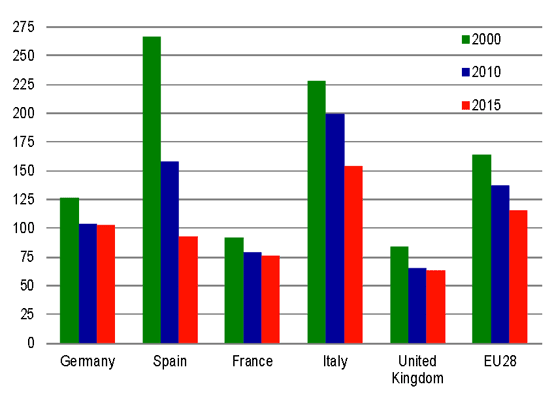 Graph 1: Cement intensity of the construction sector in Europe, 2000 – 2015. Source: Cembureau calculation based on Eurostat and Euroconstruct in Activity Report for 2016.

The really interesting data concerns so-called cement intensity. This is the quantity of cement consumed per billion Euro invested in construction. Figures calculated by Cembureau from data from Eurostat and Eurocontruct show that cement intensity has remained stable in Germany, France and the UK but that it fell sharply in Spain and Italy from 2000 to 2015. In other words the pattern of construction changed in these countries. One suggestion for this that Cembureau offers is that construction moved from new projects to renovation and maintenance. These types of construction projects require less cement than new builds. Seen in this context the huge production over capacities seen in Italy and Spain in recent years makes sense as the local cement industries have coped with both the economic crash and a step change in their national construction markets.

Further data in the report falls in line with the impression given by the multinational cement producers in their quarterly and annual financial reports. Cement production picked up in the Cembureau member states from 2012 and in the European Union members (EU28) from 2013. Meanwhile, import and export figures disentangled from a close relationship at the time of the financial crash in 2008 with imports of cement declining and exports increasing markedly. Much of it will have originated from Italy and Spain as their industries coped with the changes. Cembureau then forecasts that cement consumption will rise in 2017 by 2.4% and 3.5% in 2018 in the 19 countries than form the Euroconstruct network. A key point to note here is that most of the larger European economies will see consumption consistently grow in 2017 and 2018 with the exception of France where it growth will remain positive but it will slow somewhat in 2018. This fits with last week’s column about France with the early reports from LafargeHolcim, HeidelbergCement and Vicat reporting slight declines in sales volumes so far in 2017.

Cembureau’s country-by-country analysis also provides a good overview of its member industries. Looking at the larger economies, residential construction was the main driver for cement consumption in France and Germany in 2016. In Germany further growth is hoped for from an increased infrastructure budget set by the Federal Government. Italian cement consumption fell in 2016 and further decreases are anticipated for 2017, particularly from the public sector. By contrast though the story in Spain is still one of declining cement consumption but one heavily mitigated by exports. Spain is the described by Cembureau as the leading EU export country. Finally, there’s little recent on the UK other than uncertainty concerns about the Brexit process and an anticipated rise in infrastructure spending by 2019. The sparse detail here is probably for the best given the current political deadlock in the UK following the continued fallout from the general election in early June 2017.

In summary, Cembureau’s data shows that modest growth is happening in the cement industries of its member countries. It’s not uniform and some nations such as Spain and Italy are coping with changes in the composition of their industries. Cembureau also highlights the unpredictable consequences of the UK’s departure from the EU as one of the biggest risks in 2017. Check out the report for more information.