Cement sales volumes are down at the larger multinational cement producers so far in 2017. As the first half-year results emerge, a picture seems to be appearing of sluggish growth at best for the major internationals. Reduced working days and poor weather have been blamed for the underwhelming performance. 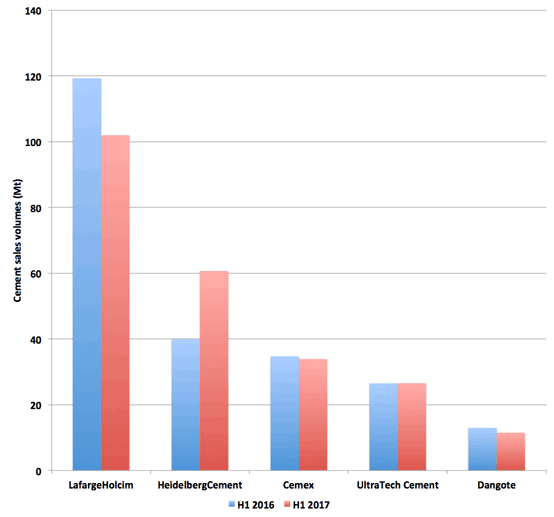 True, LafargeHolcim’s sales rose by 0.4% year-on-year on a like-for-like basis, probably due to the assets the group has been sloughing off since the merger, but this is hardly the dynamic growth shareholders may have hoped for. Meanwhile, HeidelbergCement, following its acquisition of Italcementi in late 2016, has only been able to increase its cement and clinker sales by 1% for the first half of 2017 once consolidation effects were excluded. Here the problem appears to be reduced sales in both the US and Indonesia at the same time. This then leaves Cemex with a 2% drop in sales volumes to 33.9Mt with a big drop in the US despite a promising construction market otherwise. It blamed the decline on a high comparison base in 2016 and the weather.

The larger regional players examined here appear to have fared better. Both UltraTech Cement in India and Dangote in sub-Saharan Africa reported flat or falling sales volumes. However, delve a little deeper and there’s more going on. UltraTech didn’t offer any reason for the decline although it was likely focused on its acquisition of assets from Jaiprakash Associates and the knock-on from the demonetisation process last year. That purchase increased its cement production capacity by nearly 40% to 91.4Mt/yr from 66.3Mt/yr and it seems keen, to investors at least, that it will be able to rocket up the capacity utilisation rate at the new plants.

Dangote meanwhile has taken a blow from the poor economic situation in Nigeria, where it still produces most of its cement. Here, sales fell by 21.8% to 6.86Mt from 8.77Mt, causing its overall sales to fall by 11.3% to 11.5Mt. Almost incredibly though, as Graph 2 shows, Dangote upped its sales revenue by a whopping 41.2% to US$1.13bn off the back of improved efficiencies and a much better fuel mix in Nigeria. The turnaround is impressive considering the pressure the company faced in 2016. Today’s news that the firm has sold a 2.3% stake to foreign investors adds to the impression of a company on the move. 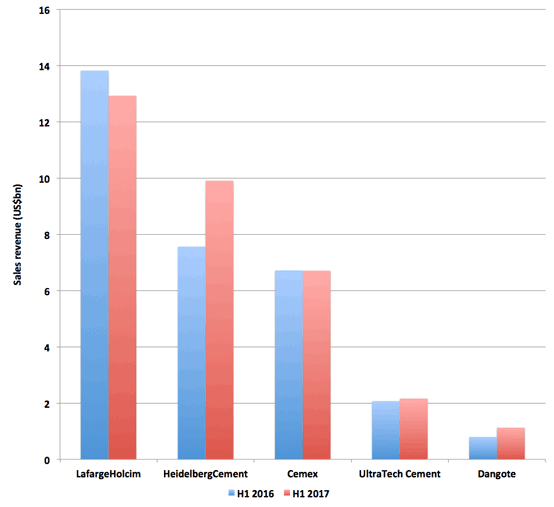 Looking at overall sales revenue shows a happier picture for most of the producers detailed here, with the exception of HeidelbergCement. Although Graph 2 shows declines for LafargeHolcim and Cemex on a like-for-like basis, at least growth is occurring. HeidelbergCement though has reported static revenue on an adjusted basis for the period. This suggests that the producer has hit problems just as it is starting to integrate the Italcementi assets into its portfolio. In theory the geographic spread of its new production units should shield it from lowered growth elsewhere but if this doesn’t happen it may be in for a rougher ride than LafargeHolcim following its merger.

In summary, being a large-scale multinational cement producer doesn’t quite seem to be offering the balanced growth one might expect so far in 2017. Cement sales volumes are slipping and revenue is also down on a direct comparison basis. It’s barely a case for comparison but smaller regionally based producers like UltraTech Cement and Dangote, in the right locations, seem to be capitalising on their positions. We’ll see how the big Brazilian producers Votorantim and InterCement, Buzzi Unicem and CRH fit this trend when they release their financial results over the next few weeks.

Last modified on 03 August 2017
Published in Analysis
Tagged under