ARM Cement’s declining fortunes this week may signal the end of the current growth cycle in the Kenyan cement industry. The cement producer posted a 20% year-on-year drop in its sales revenue to US$52m for the first half of 2017. Its financial returns have been turbulent since 2015. However, inward investment from the UK’s CDC Group in 2016 had appeared to help the company enabling it to pay of debts and even consider an upgrade project to the grinding capacity at its Athi River plant. 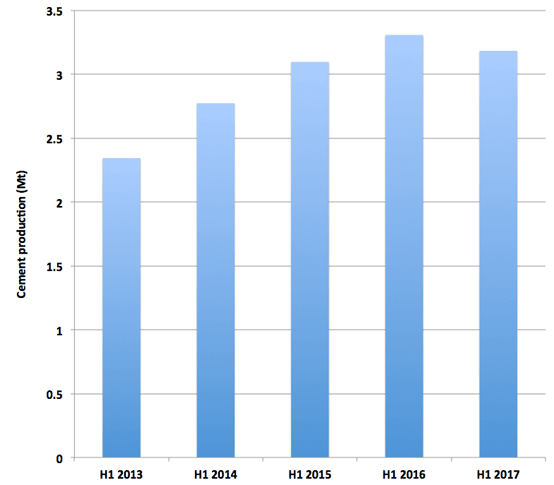 Graph 1: Cement production in Kenya for first half of year, 2013 - 2017. Source: Kenya National Bureau of Statistics. 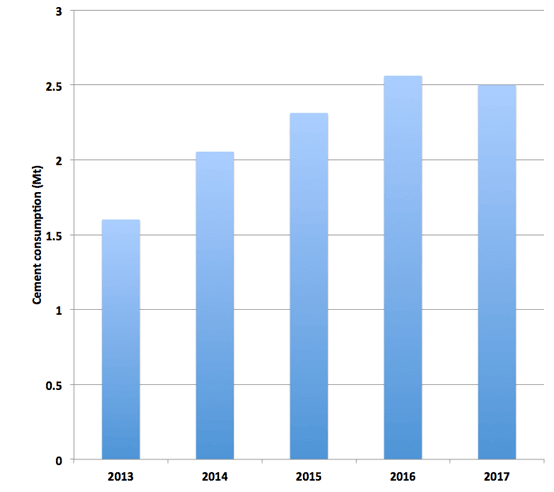 Unfortunately it now appears that the Kenyan cement market may have peaked in 2016. As can be seen from Kenya National Bureau of Statistics figures in Graph 1 and 2, production hit a high of 3.31Mt in the first half of 2016 and it has fallen to 3.18Mt for the same period in 2017. Consumption too has fallen, to 2.5Mt for the first five months of 2017. At the same time the value of building plans approved by the Nairobi City Council dropped by 12% to US$1.02bn for the first five months of 2017 with falls in both residential and non-residential applications although the decline in residential was more pronounced. One of the country’s larger infrastructure projects, the Standard Gauge Railway from Mombasa to Nairobi entered its final stage of construction towards the end of 2016 with the completion of track laying.

Bamburi Cement has also reported falling revenue and profit so far in 2017. Its turnover fell by 8% to US$170 and its profit decreased by 36% to US$18m for the half year. Bamburi blamed it on a contracting market, low private sector investment leading to residential sector issues, delays in some infrastructure projects and droughts. The drought also hit the company’s operating profit via higher energy costs. On the plus side though Bamburi’s subsidiary in neighbouring Uganda did record a good performance.

It’s likely that the general election in Kenya in early August 2017 has slowed down the construction industry through uncertainty about infrastructure investment and general fears about political unrest. Thankfully these latter concerns have appeared unfounded so far but the memory of the disorder following the poll in 2007, where over 1000 people died, remains acute. And of course the 2017 election is not over yet following the intervention of the Supreme Court to nullify the result of the first ballot and call for a second. A longer election period with the impending rerun will further add to the pressure on the construction and cement industries.

An industry report on East Africa in February 2017 by the Dyer & Blair Investment Bank fleshes out much of the situation in the region. One particular point it makes though is that, as it stands at present, building materials may be too expensive to grow the market fully. Dyer & Blair suggest that lower construction costs and more affordable home ownership methods might be the key to driving low end housing demands and in turn this might grow cement consumption.

With lots of new production capacity coming online both locally and in neighbouring countries such as Uganda and Ethiopia, the Kenyan cement market faces the dilemma of trying to balance the medium to long-term demographics with the picture on the ground. Low per capita cement consumption suggests growing markets but if the demand isn’t present in the short term then the impetus for cement producers to expand shrivels especially with aggressive imports, rising energy costs and growing local competition. Once the election period finishes the picture will be clearer but the boom times may have abated for now.