The third quarter financial results for HeidelbergCement are out today. They aren’t perfect but the company is hanging in there following its acquisition of Italcementi in late 2016. As one would expect both cement sales volumes and sales revenue are up on a double-digit basis. After all, HeidelbergCement has absorbed a major competitor, including assets, staff, cement plants and all. Its volumes and revenue have improved, more importantly though, on a like-for-like basis, even if it is modest. With the US and Europe driving sales the cement producer has time to make its promised synergies following the Italian acquisition and hopefully wait out recovery in places like Indonesia and Egypt. 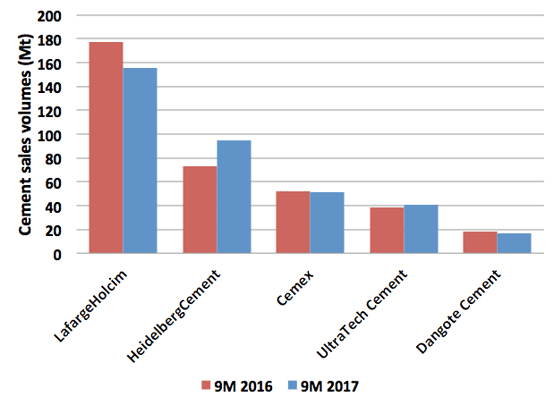 That growth on a like-for-like basis is crucial compared to HeidelbergCement’s big rival, the world’s biggest cement producer, LafargeHolcim. As Graph 1 shows sales volumes data for the major multinational cement producers shows quite a varied picture. LafargeHolcim’s sales volumes have fallen by 12% year-on-year to 156Mt but the company has also been reducing its production capacity. Despite this, a rough calculation of its production utilisation rate suggests that it is selling less cement proportionally, although the company’s like-for-like figures disagree, positing a rise of 1.8%. Cemex’s sales volumes declined slightly to 51.3Mt. The larger regional companies show interesting trends. UltraTech Cement has managed to increase its sales volumes by 5% to 40.4Mt overcoming a poor third quarter in 2016. What to watch here will be whether this will be enough to overcome the effects of demonetisation that rocked India’s economy in late 2016. 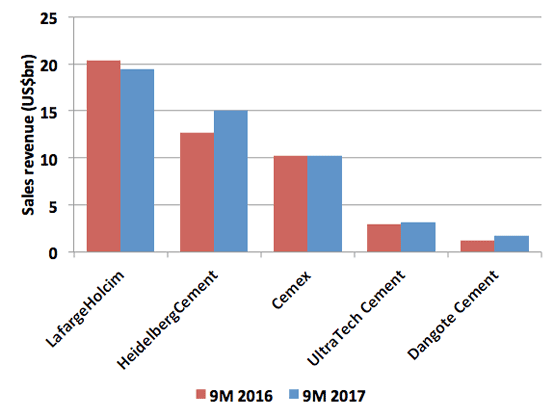 The stronger regional positions of those last two companies really hits home when sales revenue is examined. As can be seen in Graph 2 both UltraTech Cement and Dangote Cement are growing their sales revenue, the latter despite dropping sales volumes. UltraTech Cement is suffering from falling profits due to rising fuel costs and it may yet suffer from ‘corporate indigestion’ as it digests its acquisition of 21.2Mt/yr cement production capacity from Jaiprakash Associates that took place in June 2017. Dangote Cement seems to have increased its earnings and profits despite problems at home in Nigeria by improving its fuel mix. Yet, flirtations with South Africa’s PPC aside, its expansion plans remain in a holding position. Dangote Cement presents another fascinating situation. Its overall sales volumes have fallen but this reflects a failing market at home in Nigeria and doesn’t show the company’s booming sales in the rest of Sub-Saharan Africa.

Results from CRH and the Brazilian companies Votorantim and InterCement will further flesh out the situation when they are released. Yet, the difference between worldwide producers and regional producers seems to be clear. The likes of LafargeHolcim and Cemex with a global presence are generally battling stagnation in the cement markets overall with a couple of key markets holding them back. Meanwhile, larger regional producers in the right locations are growing. However, the absence of the Brazilian producers is critical here as their experience of the floundering market in Brazil is very different to that of, say, UltraTech Cement’s in India. Looking ahead, the next quarter will be particularly interesting to see how demonetisation skewed UltraTech Cement’s performance, to start to see the first results from HeidelbergCement a year after its purchase of Italcementi and how well LafargeHolcim’s new chief is doing.

Last modified on 08 November 2017
Published in Analysis
Tagged under