Forget the news stories about poor markets in Colombia and Brazil. Argentina is riding a construction boom right now. Local producer Loma Negra recently ran an initial public offering and it picked a good time to do it. It aimed to generate up to US$800m from the flotation and in the end it raised over US$1bn. Good news for its Brazilian owner InterCement no doubt, which was last reported as aiming to sell a 32% stake in the company in order to cover its debts. More cheer must have followed from Loma Negra’s third quarter results this week. Its cement sales volumes rose by 9% in the latest quarter to 1.72Mt due to expanding local construction activity. 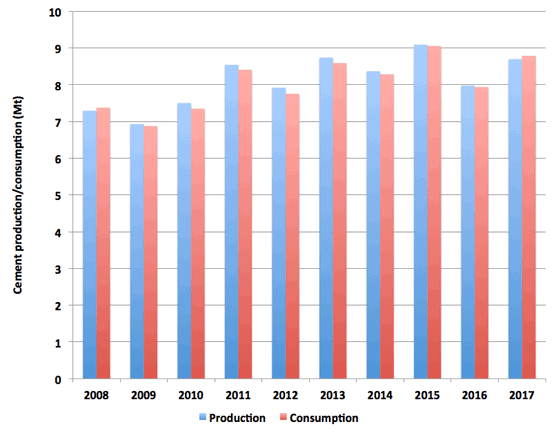 As Graph 1 shows its experience mirrors the wider industry. Cement production rose by almost the same rate for the industry as whole, by 10% year-on-year to 3.19Mt for the quarter, according to Asociación de Fabricantes de Cemento Portland (AFCP) data. For the nine months as a whole production has also risen by 9% to 8.7Mt. This figure is the third highest in the last decade since 2008. Production peaked in 2015 before dropping a major 10Mt following a subdued construction industry in the wake of devaluation of the Argentinean Peso in late 2015 and early 2016. At the time LafargeHolcim, the operator of Holcim Argentina, also blamed the negative influence of neighbouring Brazil’s own financial woes. The economy has bounced back giving the country’s its highest nine month cement consumption figure, 8.8Mt, in the last decade.

Earlier in the year LafargeHolcim said it was importing 0.25Mt of cement into Argentina between May 2017 and April 2018 because it couldn’t meet local demand from its own plants. Given the over-abundance of clinker in the world one might be forgiven for being sceptical about this claim. Bolivia’s Itacamba announced it was also exporting cement to Argentina this week. However, the other point to note from the graph is that consumption has been about 90,500t higher than production so far in 2017. This is an envious position for local producers to be in. One more striking feature that sticks out from the graph above is the undulating curve than both production and consumption has. The Argentinean economy has been through the ringer in recent years and this shows in the ups and downs of the figures.

From the perspective of the three major domestic producers, Loma Negra’s sales revenue rose by 53.9% year-on-year to US$620m in the first nine months of 2017. Its adjusted earnings before interest, taxation, depreciation and amortisation (EBITDA) rose by a whopping 73% to US$157m. Cementos Avellaneda, owned by Spain Cementos Mollins and Brazil’s Votorantim, reported similar good news with its overall results boosted by the Argentine market. Its sales revenue in the country rose by 28.3% to Euro130m and its EBITDA rose by 59.5% to Euro32.4m. Although Mollins did make the point that inflation had been particular problem in Argentina, although its impact had been ‘greatly’ outweighed by price rises. LafargeHolcim has had its problems globally so far in 2017 but Argentina hasn’t been one of them. Its operations in the country have been propping up the group’s Latin American results each quarter so far in 2017. Despite being one of its smaller regions by sales revenues, its sales and earnings delivered some of the group’s highest growth in the third quarter of 2017.

In this kind of environment new production capacity can’t be far away. Sure enough Cementos Avellaneda plans to increases the capacity of its San Luís cement grinding plant by 0.7Mt to 1Mt/yr by the second quarter of 2019. US$200m has been earmarked for the project.

So, great news for Argentina and proof that poor markets can turn around. The Brazilian cement association SNIC reckoned in October 2017 that the rate decline of cement sales was slowing, suggesting that the bottom of the downturn was in sight. On the evidence of the current situation in Argentina once the market does revive, South America will be the place to watch.