Recent data from Cemsuisse, the Swiss Cement Industry Association, shows that cement shipments fell by 2.8% year-on-year to 4.3Mt in 2017. The local industry has fluctuated from a high of just below 4.7Mt in 2011 with various peaks and troughs since then as can be seen in Graph 1. The current drop has been blamed on a poor start and end to 2017 despite some rallying activity in the third quarter. 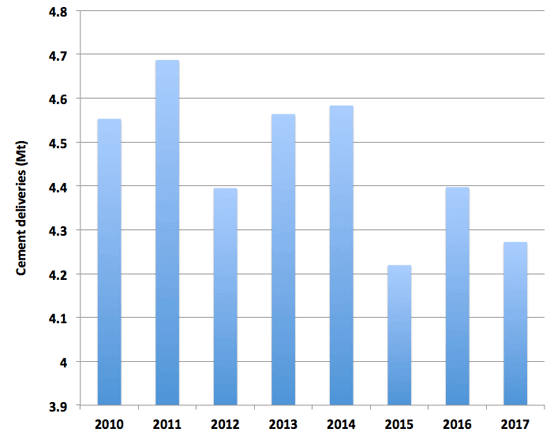 The local industry tends to get overlooked somewhat due to its modest size, its geographically landlocked position and its exclusion from the European Union (EU) despite being surrounded by member states. This is a mistake though because the territory offers lessons on how a developed cement industry can function and co-exist with a large neighbour. In Switzerland’s case it has access to the EU market through a series of bilateral agreements that provide parity with EU legislation. After a potential crisis over immigration following a local referendum in 2014, Switzerland and the EU came to an agreement in 2016 that softened the labour rules for foreigners. Pertinent to the cement industry, the EU and Switzerland signed a deal to link emissions trading systems in 2017. It is currently anticipated to come into force in 2019. Trading in the EU may come at the price of free movement of labour but emissions trading parity will also help to protect Switzerland’s cement plants.

The country has a cement production capacity of 4.3Mt/yr according to Global Cement Directory 2017 data. This divides into three plants operated by LafargeHolcim, two by Ireland’s CRH’s local subsidiary Jura Cement and one by Vigier Cement, a subsidiary of France’s Vicat. Most of these plants are around the 0.8Mt/yr mark, with the exception of Jura’s smaller Cornaux plant.

After a strong performance in 2016 with growing cement sales volumes, LafargeHolcim started 2017 with continued positive cement sales but this failed to compensate for low aggregate sales and falling ready-mix (RMX) concrete sales. CRH reported a similar experience that it blamed on poor weather at the start of the year and a competitive environment. This then led to an 8% fall in cement sales in the first nine months of 2017 with RMX sales and operating profit down too. Vicat’s experience in the country followed that of its competitors, with cement sales rising slightly over the first three quarters but concrete and aggregate sales dropping. Among other reasons it blamed the situation on the completion of road and civil engineering projects.

Cembureau, the European Cement Association of which Cemsuisse is a member, forecast a stable year in 2017 following the wind-down of infrastructure projects with support from the housing sector. However, it then expected the market to soften as demographic trends saw slower growth in population reduce housing demand. This state appears to have arrived early. On the plus side though the industry’s sustainability credentials have grown as the split between truck and train transport of cement hit its highest ratio in favour of rail in 2017 at 53%. The trend switched from truck to train in 2013 and it hasn’t looked back since then.

As a mature economy in the heart of Europe, Switzerland generally pops up in the industry news as the home of the world’s largest non-Chinese cement multinational, LafargeHolcim. That company’s headquarters are in Jona and Holcim had its headquarters in Holderbank. LafargeHolcim’s single largest shareholder, with an 11% share, is the Swiss billionaire Thomas Schmidheiny, who inherited his portion of the family business. He notably called for a better deal for Holcim during the merger negotiations between Lafarge and Holcim in 2015 and boardroom struggles have dogged the combined company ever since. Consideration should also be granted to the country’s other engineering and construction industry related multinationals such as ABB, Sika and the like. By the numbers Switzerland has a case for being one of the world’s most important nations for the cement industry.