Congratulations are due to Bamburi Cement this week after the completion of a new production line at its Nairobi grinding plant. The new US$40m line will add 0.9Mt/yr of cement production capacity to the unit, bringing its total to 2.4Mt/yr when it is commissioned towards the end of 2018. Together with the subsidiary of LafargeHolcim’s integrated plant at Mombasa the company will have a production capacity of 3.2Mt/yr. 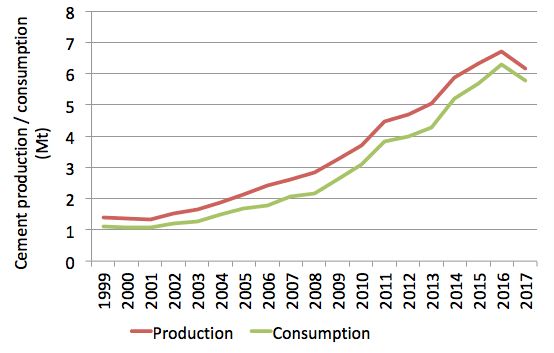 As Graph 1 shows above it is an interesting time to open new production capacity in the country. Both production and consumption fell for the first time since 2000 in 2017. Production fell by 8.2% year-on-year to 6.2Mt in 2017 from 6.7Mt in 2016 and consumption fell by a similar amount. The change was blamed on reduced demand for building materials in the construction sector occurring at the same time as a fall in the value of building plans approved in 2017. The country also suffered political uncertainty as its general election in August 2017 was subsequently annulled and repeated in October 2017.

With Global Cement Directory 2018 data giving Kenya a cement production capacity of 5.2Mt/yr from five producers and at least four grinding plants with a capacity of 4.6Mt/yr it looks like the country is in an overcapacity phase. The question for producers like Bamburi Cement is whether 2017 is just a temporary blip or not. After all, as per usual for many African countries, the demographic pressure for development to happen and per capita cement consumption to grow seems ineveitable.

Bamburi Cement is not alone in betting on growth. Also this week the Kenya Port Authority recevied four hoppers from the UK’s Samson for the Port of Mombasa. The hoppers will be used to import clinker, coal and gypsum at the site. Earlier in February 2018, National Cement opened a 1.2Mt/yr integrated plant in Kajiado County. On the larger scale Nigeria’s Dangote Cement has been preparing to open two cement plants, near Nairobi and Mombasa respetively. However, these project were reported delayed to 2021 in its annual report for 2016 around the time the company faced problems at home due to a local financial recession.

Meanwhile local producers have faced pressure so far in 2018. Bamburi Cement reported a 6% fall in turnover to US$357m in 2017 that it blamed on the weather, the elections and lower construction activity. Other producers have had a harder time of it with the East African Portland Cement (EAPC) reportedly having to rely on a land sale to remain solvent in April 2018. ARM Cement has also been forced to sell assets to remain operational. Its loss for 2017 more than doubled to US$55m. Amid the problems the UK-government investor CDC Group, which holds a 41% stake in the company, replaced board members of the company in a likely bid to shore up the situation.

It’s into this kind of situation that Bamburi Cement has opened its new plant. On the plus side though it is a grinding plant so it should be able to maximise the company’s use of clinker from either within the country or from imports from other LafargeHolcim operations elsewhere. In its press release for the new unit the company pinned its hopes on anticipated growth in domestic housing and infrastructure projects, backed by government schemes for affordable housing and roads. With the rating agency Moody’s having issued a report this week about the relative reslilence of the Kenyan economy despite recent shocks such as last year’s elections, Bamburi Cement may yet have the last laugh.

Last modified on 04 July 2018
Published in Analysis
Tagged under