Should LafargeHolcim sell in Indonesia?

Holcim Indonesia was forced to refuse to comment on rumours this week that it might be selling up. Local business press in the country was running stories that parent company LafargeHolcim was in the early stages of a possible divestment. Although the stories seemed pretty spurious, Holcim Indonesia’s share price rose on the news.

The situation is reminiscent of an anecdote attributed to the former US president Lyndon Johnson by Hunter S Thompson about making a political opponent deny a ridiculous rumour. If they don’t respond then it looks like they have something to hide and if they do engage with a denial then they look silly anyway. In Holcim Indonesia’s case, as soon as the cement producer actually refused to comment the story gained more credence.

Part of the reason why the Holcim Indonesia story has legs is because LafargeHolcim has said it plans to make divestments of Euro1.7bn in 2019. There is rampant production overcapacity in Indonesia. The territory is exactly the kind of place you might expect LafargeHolcim to consider leaving. As recently as early in 2017 Semen Indonesia, the main producer, was showing the gaping production capacity – consumption gap in its investor presentations with no catch-up until at least 2020. Romauli Panggabean, an analyst for Bank Mandiri, was even more blunt in a forecast for the Jakarta Post in mid-2016. She ran a model predicting that if production capacity doubled to 150Mt/yr by 2017 then it would take the market until 2032 to catch up with an assumed 7% construction growth rate. Panggabean’s simulation seems to massively overstate capacity growth in the country as Global Cement Directory 2018 data places integrated (clinker) plant capacity at 79.3Mt/yr. By comparison the Indonesia Cement Association (ASI) placed cement production capacity at 108Mt/yr in 2017. Both of these figures are far below 150Mt/yr. 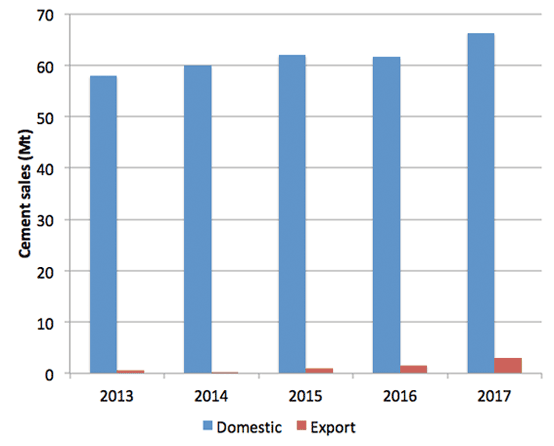 The graph above sets the scene for the capacity wobble worries in 2016 and 2017 as sales growth faltered. It picked up in 2017 with domestic sales rising by 7.6% year-on-year to 66.4Mt. Sales so far in 2018 support this trend, with domestic sales growing by 6.4% to 21.06Mt for January to April 2018. The other trend to note here has been the explosion in exports in recent years with a near doubling to 2.93Mt in 2017 and an accelerated continuation of this trend so far in 2018.

Holcim Indonesia operates four integrated cement plants at Narogong in West Java, Cilacap in Central Java, Tuban in East Java and Lhoknga in Aceh with a production capacity of 15Mt/yr. In addition it runs two cement grinding plants at Ciwandan in West Java and Kuala Indah in North Sumatra respectively, although this last unit is currently mothballed. It also owns cement terminals in Lampung and a new one in Palembang in Sumatra.

LafargeHolcim owns an 80% share of Holcim Indonesia, its main subsidiary in the country. In 2017 Holcim Indonesia described the local situation as one of ‘hyper competition’ due to market overcapacity. Production capacity was over 100Mt/yr but consumption was only 70Mt/yr. Its overall cement sales volumes including exports rose by 7.8% year-on-year to 11.1Mt in 2017 from 9.6Mt in 2016. But despite this its net sales fell slightly to US$953m due to falling prices as new competitors entered the market. Its earnings before interest, tax, depreciation and amortisation (EBITDA) also fell. The positioning of its production units is relevant in Indonesia given the concentration of sales in Java but the faster growth in sales rates and higher competition in other regions.

Both of the other market leaders, Semen Indonesia and Indocement, reported similar problems in 2017 but they don’t appear to be looking to make cuts. Put it all together in LafargeHolcim’s case and you have a group-level desire to sell off parts of the business, overcapacity locally with no end in sight in the short to medium term, falling earnings and profits and some hope that consumption is heading back to its normal brisk rate. All of this seems to suggest that now would be the perfect time for it to exit Indonesia if it decided to. So, if LafargeHolcim isn’t already soliciting offers then maybe it should be. The tough call would be deciding whether to leave the country altogether or to just sell a share of the business. Leaving totally would significantly reduce the group’s presence in South-East Asia and reduce its profile as a truly global player. However pride and money-making are not the same thing. In the meantime though, the only people making a fortune will be the speculators.

Last modified on 31 July 2018
Published in Analysis
Tagged under