Earlier this year South Africa’s PPC commented on the drought facing Cape Town. It said that cement manufacturing was not water intensive, that its operations were ‘totally’ self-sufficient from its own surface water sources with capacity for several months and that it was working with the local government which viewed construction as an important economic sector. Point made!

Water conservation is an established part of the sustainability toolkit for cement producers. Yet recent weather patterns in the Northern Hemisphere may also test how well companies are doing. Above average temperatures have been recorded this summer, in some places accompanied by unusually dry conditions. A news story this week about Cemex Colombia being fined for using water from a river shows one aspect of the problems that can face industrial users. Another story that we’ve covered previously has been the legal action taken against producers using water from a site near to the Katas Raj Temples in Pakistan.

Wet process cement manufacturing uses more water than dry process but even modern plants use water for cooling equipment and exhaust gases, in emission control systems such as wet scrubbers. In addition, quarrying and aggregate production may require water, and concrete production also needs water. Issues also arise with quarry dewatering and discharging water into rivers and the like. Global Cement Directory 2018 data indicates that, where known, about 10% of integrated cement plants still use a wet production method. 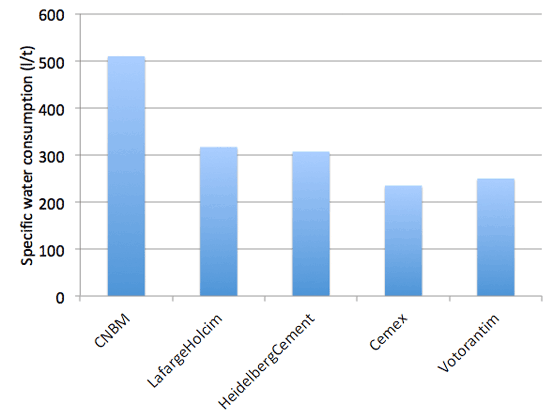 As Graph 1 shows there is some variation between the major cement producers with regards to how much water they use. They all operate with different types of equipment and production methods in different geographical locations so the difference between the companies is to be expected. A cement plant in northern Europe that normally experiences high levels of rainfall will have a different approach to water conservation than one, say, in a water stressed area like the Middle East. Incidentally, the definition used to define a water-stressed or scarce area is one where there is less than 1000m3/yr per person. One other point to note here is that each of the companies has a higher consumption figure than the 100 – 200L/t that the Cement Manufacturers' Association of the Philippines (CeMAP) reckoned that an average dry-process cement plant used when it was promoting water conservation back in 2013.

Looking at specific recent success stories, India’s UltraTech Cement reported a specific water consumption of 54L/t of clinker at its Star Cement plant in Dubai, UAE in 2016 – 2017 following a dedicated initiative at the site. An another milestone that UltraTech Cement was keen to point out in its last sustainability report was that three of 13 integrated plants had achieved water sufficiency though the use of the company’s 360° Water Management Model with its use of rainwater harvesting and recharging groundwater. These plants are not dependent on any groundwater or fresh water sources. The other larger cement producers all have similar water management schemes with reduction targets in place.

Climate change models generally predict hotter and wetter weather but changing weather patterns and growing populations are likely to impact upon water management and consumption. Given the integral nature of water in the cement production process, many cement producers have realised the importance of it and treat it as an input material like fuel or limestone. Hence the highlighting of water conservation in company sustainability reports over the last decade. The test for the success of these initiatives will be how producers cope in drought situations where they may be seen as being in competition with domestic users. Thankfully in PPC’s case, Cape Town avoided having to ration water to the general public, as the rains returned in the spring.