Where next for global cement associations?

The Global Cement and Concrete Association (GCCA) announced this week that it intends to take over the work done by the Cement Sustainability Initiative (CSI). This marks a change in how the cement industry as a whole approaches sustainability and in the wider context how the sector manages itself on the world stage.

The CSI was set up in 1999 with the aim of advancing a sustainability agenda for the cement industry. It has done this by laying out strategy for the industry to follow in the form of technology roadmaps and publishing its ‘Getting the Numbers Right’ (GNR) data on CO2 and energy performance information. By 2018 it had 24 cement company members composed of nine core members, 14 participating members and one affiliate member. It represents around 2.4Bnt/yr of global cement production capacity or over half of the world production, according to Global Cement Directory 2018 data.

The idea behind the membership was that the core members are all members of the World Business Council for Sustainable Development (WBCSD) and that the members would contribute ‘modest’ funds to run the organisation. That last point about WBCSD membership is worth noting because members need to stick to conditions such as publishing an annual sustainability report and agree to have the sustainability report reviewed and benchmarked by the WBCSD. 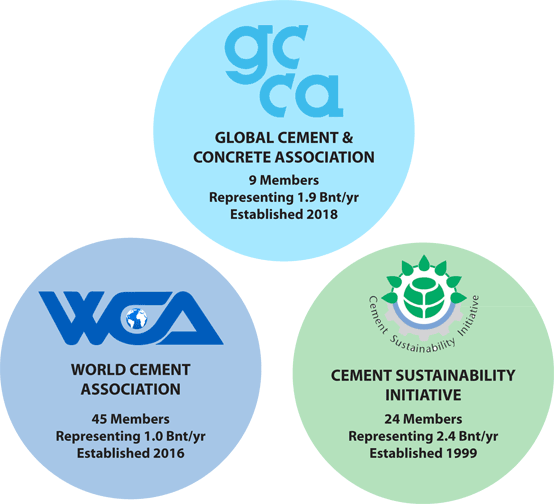 The GCCA, which formed in early 2018, says it had formed a ‘strategic’ partnership with the WBCSD and that it will take over the work previously done by the CSI from the start of 2019. Although there’s no mention so far whether GCCA members have to actually become WBCSD members with all that this entails. At present the GCCA consists of nine major international cement producers, including over half of the world’s top 10 producers by production capacity, with a production base in every inhabited continent except Antarctica. Roughly speaking it represents just under 2Bnt/yr of global cement production capacity or about half of the world’s total.

Now where this starts to get confusing is that other cement associations exist with their own established advocacy roles and sustainability agendas. The established players include the various regional associations such as the Portland Cement Association in the US, Cembureau in Europe and so forth. The multinational ones also often represent national bodies.

Then there is the World Cement Association (WCA), which formed in 2016. This independent body is a private company run out of an office in London, UK with non-profit aims. It has 45 members but only three quarters are actual cement producers. Of these most are single-country cement manufacturers. The glaring standout is China National Building Material (CNBM) and its subsidiaries, representing over half of the association’s member’s cement production capacity. The production capacity of the WCA’s members is around 1Bnt/yr or a quarter of the global total. More than half of this comes from CNBM and its subsidiaries. Unsurprisingly then that Song Zhi Ping, the head of CNBM, is the president of the WCA. It too supports a sustainability agenda, saying that it, “seeks to co-operate with the WBCSD, CSI and regional and national Cement Associations.” What is noteworthy is how few of the current members of the WCA joined the CSI previously.

There is definitely a need for a global organisation advocating sustainability issues for the cement industry and by taking over the work of the CSI and the GCCA has cornered this part of what a global cement association might do. However, the GCCA represents less cement production capacity than the CSI did. The main omissions are the Indian producers, led by UltraTech Cement, as well as others. It seems likely that they will join the GCCA following the end of the CSI but there is no guarantee.

The other point arises when looking at these various cement associations is: who does what exactly? The CSI’s focus on sustainability gave it a purpose that it did well with a genuine appearance of independence. Its narrow focus also gave it a complimentary role to the existing national and regional associations. Global bodies like the GCCA and the WCA are clearly more into advocacy territory for their members. Also, a more general association approach like the GCCA and the WCA may clash with regional bodies like the PCA and Cembureau. Regional bodies seem better suited to the way governance works globally with regional groups such as the European Union (EU) or government departments in continental sized countries such as the US, China and India. However, a truly global cement body could respond better to coordinated environmental lobbying and fill in the gaps around the world in places with looser regional representation.

Sustainability is the immediate link between the CSI, the GCCA and the WCA. Indeed the WCA recently held a ‘Global Climate Change’ forum in Paris to discuss its own climate action plan. Yet, with the GCCA taking over the work the CSI does and the WCA saying it wants to cooperate with the CSI, the obvious outcome is that the GCCA will become the world’s apex cement association. It will represent the companies with the most cement production capacity, have a presence in every inhabited continent and take the lead on WBCSD issues. Beyond this though it will be interesting to see what, if anything else, the GCCA chooses to do.

Last modified on 08 August 2018
Published in Analysis
Tagged under