CNBM marks its place as the world’s largest cement producer

The world’s largest cement producer China National Building Material (CNBM) released its half-year results this week and the figures were generally good. Despite falling production, the state-owned company has managed to raise its prices year-on-year to generate significant sales revenue and earnings increases. As usual the level of detail was fairly light, although not much lighter than some non-Chinese producers on the international market. The key point was that cement production fell by 5% year-on-year to 143Mt. This was due to poor demand, mounting environmental regulations and rising input costs.

The half-year report was significant because it is the first financial report from the company since its merger with China National Materials (Sinoma) completed in early May 2018. Just like the reports of LafargeHolcim and HeidelbergCement following mergers or acquisitions, CNBM has seen a boost to its performance. Further gains from scale and synergy are expected. The union has indisputably created the world’s biggest cement producer, putting aside any European or American cries of over-calculation of production capacity on the part of their Chinese rivals. However, size comes with particular problems.

Placed in a wider context CNBM and its owners, the Chinese government, are attempting to manage a wind-down from the biggest construction boom in human history. National Bureau of Statistics data show that sales of cement fell by 10% to 984Mt in the first half of 2018 from 1.1Bnt in the same period in 2017. So, falling cement production volumes are not a surprise. What is curious, though, is how cement prices have appeared to rise in a country with massive production overcapacity. Each of CNBM’s cement producing subsidiaries reported that its average selling price of cement grew year-on-year. 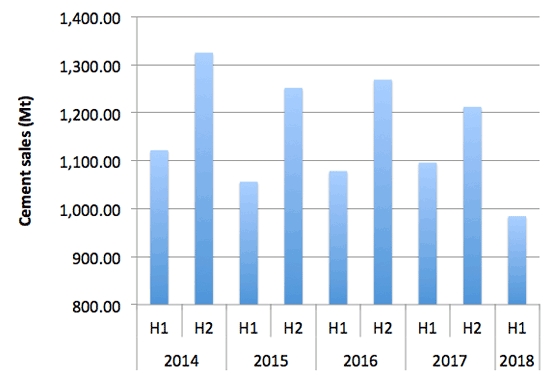 Regional variation could explain some of this in a country as large as China and similar trends can be observed in India with its own diverse internal markets. The local focus on environmental regulations offers another explanation. In June 2018 the government’s State Council issued regulations to reduce the production capacity of construction materials, set up emission limits for pollution, implement peak shifting of production and to establish a ‘strict’ accountability mechanism for all of this. CNBM has followed these directives with its ‘Price – Cost – Profit’ (PCP) strategy and all of its subsidiaries have conformed to this. What is not covered in the report is whether there is a negative financial effect of peak shifting and other environmental regulations and how bad this is.

It’s easy to dismiss the performance of a state-controlled company but the enlarged CNBM is facing a unique set of challenges. It appears to be off to a great start but both its scale and its challenges are unprecedented. In its outlook for the second half of 2018 it said that the, “contradiction of overcapacity in the industry has not been changed fundamentally.” This suggests that, although cement prices and profits have held up so far, there is no guarantee that this situation will continue.