One of the more interesting news stories in recent weeks was the completion of Oyak Cement’s acquisition of Cimpor. Previously we focused on the connection to Taiwan Cement (GCW377). Around the same time that the Oyak-Cimpor deal was announced in late October 2018 the Taiwanese company bought a 40% stake in the Turkish cement producer for around US$640m. However, as the world’s sixth largest cement producer by cement production capacity, Turkey is always a country worth keeping an eye on for both the Oyak deal and the wider industry. 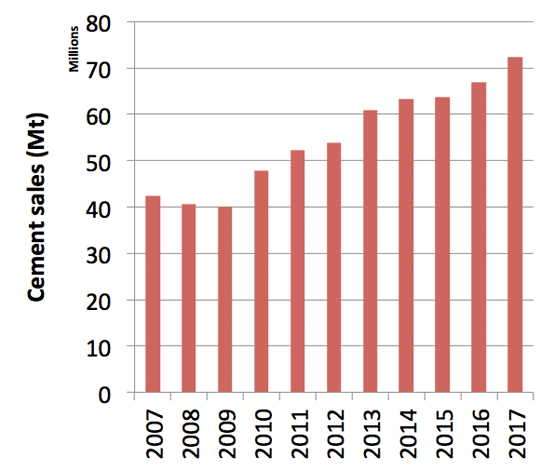 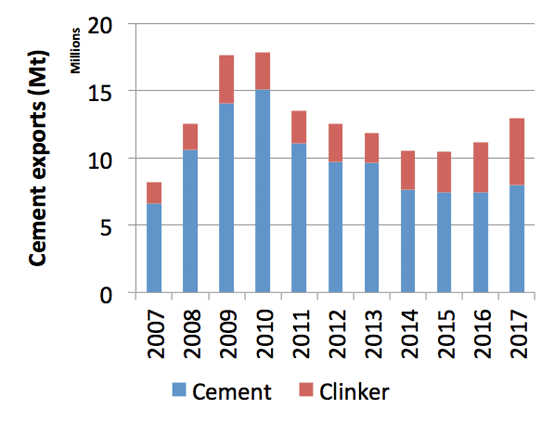 Data from the Turkish Cement Manufacturers' Association (TÇMB) shows that domestic cement sales have been rising steadily to 72.2Mt in 2017 after a blip in the late 2000s. So far 2018 has not kept the trend, with a drop of 2.01% year-on-year to 50.8Mt for the first nine months of 2018 from 51.8Mt in the same period in 2017. Turkey is also a major exporter of cement so these are the other figures to watch. After hitting a high of nearly 18Mt in 2010 they dropped for five years before rising again. The ratio of clinker in the exports total has also been growing recently. LIke domestic production ,exports were down at the nine month mark in 2018, by 1.8% to 9.9Mt, but the ratio of clinker exports has continued to grow.

Given the focus on exports for the Turkish market Oyak Cement’s international purchases via Cimpor widen its options. The deal covered assets in Portugal and Cape Verde including three integrated cement plants and two mills, with a total cement production capacity of 9.1Mt/yr. It’s not clear yet how Oyak wants to run its new foreign plants but it might be tempting to focus on a grinding model abroad using imported Turkish clinker depending on running costs. Back home in Turkey Oyak Cement is the largest local producer with a 15% market share. It operates seven integrated plants with a production capacity of 16Mt/yr according to Global Cement Directory 2019 data.

As for the other major companies, Akçansa, a joint venture of Sabancı Holding and HeidelbergCement, saw its sales rise by 4% to US$277m in 2017. Its sales volumes of cement and clinker rose but its exports fell by 13% to 1.3Mt. In its third quarter report for 2018 HeidelbergCement highlighted issues with the local economy such as high inflation, a currency crisis and a resulting loss of confidence.Sabancı also holds a majority stake in the other major producer, Çimsa Çimento. At the six month mark Çimsa Çimento reported that its sales grew by 35% year-on-year to US$162m and its net profit increased by 55% to US$23.2m. Notably, Çimsa also runs a number of international terminals in Germany, Italy, Spain, the disputed Turkish Republic of Northern Cyprus and Russia, with distribution operations in Romania and the US also.

As mentioned above the general Turkish economy faced problems in 2018 when the value of the Turkish Lira dropped sharply in mid-2018 and interest rates soared. This led to a reduction in industrial output. On the cement side this is likely visible in falling local sales in 2018 and the switch to exports. Raw materials have also risen in this environment leading the president of the TÇMB to reassure the construction industry that the price of cement would not rise too sharply in 2019. Some of the eye-watering input hikes that he cited included a 76% rise in electricity costs, a 182% rise in the price of coal and a 170% rise in the price of petcoke. With this kind of backdrop the 2018 annual results for the Turkish producers may not make easy reading. Yet this also may explain why Oyak Cement moved overseas and allowed Taiwan Cement to invest in it when it did. Looking more widely it seems exports are likely to grow in the near future.

Last modified on 20 February 2019
Published in Analysis
Tagged under