2018 for the cement multinationals

All the major multinational cement producers reported growing sales in 2018. Yet, the big growth was found outside of Europe, with China Resources Cement (CRC), Ultratech Cement and Dangote Cement all posting sales revenue growth of above 10%. Similarly, cement sales volumes continued to rise. CRC and Ultratech Cement were the standouts here, with the latter benefitting from its acquisitions including, most recently, Binani Cement. Concrete sales volumes were the same, rising for all the companies with the exception of Buzzi Unicem. It suffered market issues in Italy and Germany. 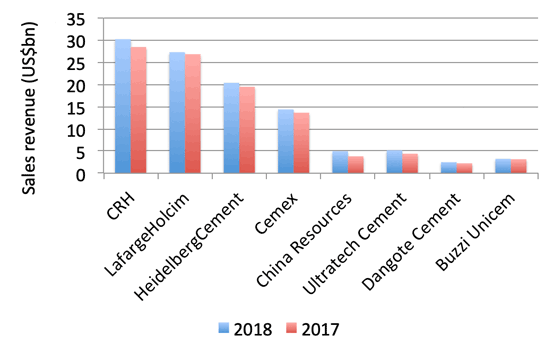 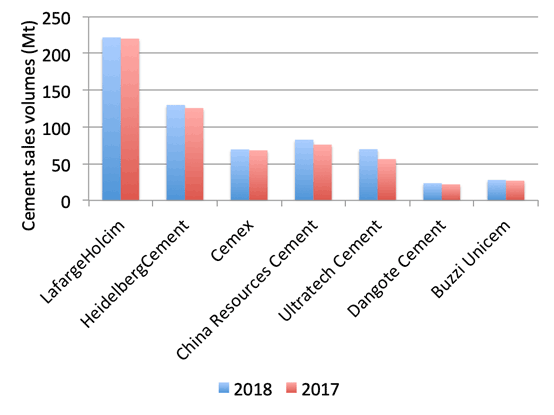 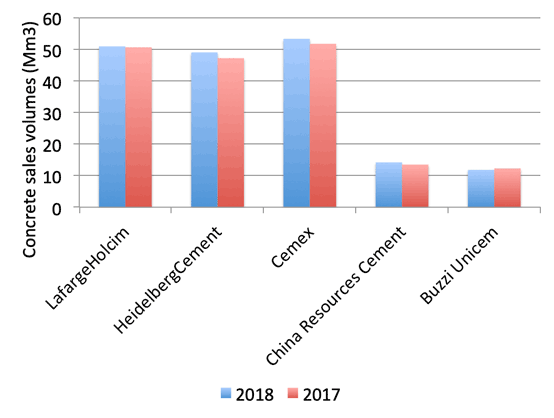 With the major Chinese producers, including CNBM and Anhui Conch, yet to release their annual results for 2018, CRC is included in this roundup to give an idea of how that market is performing. Both CNBM and Anhui Conch have released profit alerts anticipating bumper results in 2018 though. This is likely due to boosted local cement prices.

The major story for the European-based producers was one of asset sales and debt reduction. LafargeHolcim returned to positive income in 2018 with a focus on its Strategy 2022 programme. HeidelbergCement’s earnings were hit by poor weather in the US and insufficient divestments. Cemex, although based in Mexico, retains a significant European presence and so it included here. It suffered from poor sales outside of its base in Mexico and the US. CRH continued on its trajectory as the world’s biggest building materials company with solid sales and earnings growth. Interestingly though given its expansion strategy in recent years CRH’s debt to earnings before interest, taxation, depreciation and amortisation (EBTIDA) ratio remains better than the other three majors above, even after its purchase of Ash Grove Cement in mid-2018 taken into account. Although other financial comparisons are worth considering, such as EBITDA margin.

Despite Cemex’s relatively high net debt compared to its peers it has been cutting its debt the fastest, at 8% to US$10.4bn in 2018. Its current plan is to reach an ‘investment-grade’ balance sheet by 2020. LafargeHolcim and HeidelbergCement are in ‘cuts’ mode leading to all sorts of speculation about where they might sell next. The wilder rumours in the press include preparations by LafargeHolcim to sell its entire operation in the Middle East and Africa. Similar tales about a sale in the Philippines are more credible but remain unconfirmed. HeidelbergCement is keeping its cards closer to its chest but poor performing territories that might be up for sale include some of its Italian plants and parts of Africa.

Of the larger producers without a European presence, Ultratech Cement has been negatively effected by energy costs during the nine months to the end of 2018 with its income and EBITDA down. Dangote Cement’s performance in 2018 was driven by sales at home in Nigeria although earnings elsewhere continued to grow.

With all of this in mind the scene appears set for a breakout by a major Chinese producer to buy a big bolt-on acquisition or expansion by regional or national players along the lines of that seen by Semen Indonesia or UltraTech Cement. Taiwan Cement has been ahead here with its purchase of a 40% stake in Turkey’s Oyak Cement but what we’re really waiting for is a majority position within a country or territory. At which point CNBM and the like will have earned its place in the 2019 version of this article. Perhaps the age of truly multinational cement producer is coming to an end as regional players become more prominent.