Cement price rises by the major Chinese cement producers boosted sales revenue and profits in 2018. This is quite a trick, given that overall cement sales in the country have fallen by 11% year-on-year to 2.17Bnt in 2018 from a high of 2.45Bnt in 2014. 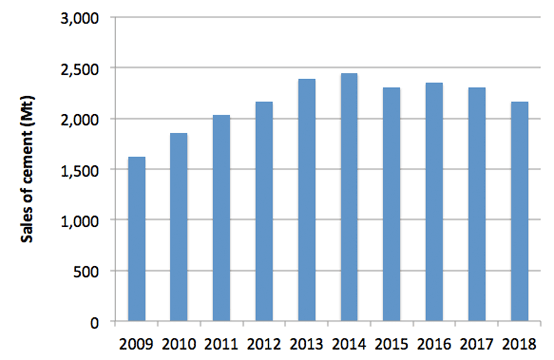 On the corporate side most of the major Chinese producers issued positive profit alerts towards the end of 2018 and this has been followed up by (mostly) glowing financial reports. Data from the National Development and Reform Commission in February 2019 showed that the profits of local cement companies more than doubled to US$64bn in 2018 compared to 2017. As mentioned above, this has been fueled by price rises. In December 2018 the average price of cement was 10.6% higher than in December 2017.

This has translated into a 19% year-on-year rise in sales revenue at China National Building Material Company (CNBM) to US$32.6bn in 2018 from US$27.4bn in 2017 and its profit grew by 44% to US$2.09bn from US$1.46bn. Anhui Conch’s performance was even better. Its revenue grew by 70.5% to US$19.1bn from US$11.2bn. However, differences emerge between the two companies in terms of cement sales volumes. CNBM’s sales volumes fell by 2.4% to 323Mt. However, Anhui Conch’s sales volumes increased by 25% to 368Mt. This may not be in line with the government’s plans to scale down production but it does fit the industry consolidation model, as the company acquired Guangdong Qingyuan Cement in 2018. The results from other producers such as China Shanshui Cement, West China Cement, Tianrui Cement and China Resources Cement all tell similar tales.

If the figures from the National Bureau of Statistics China (NBS) above are accurate then this is a drop of over 300Mt of cement sales over four years. This is more than the cement sales of every other country except India. Indeed, it’s more cement than some continents make! It marks the deceleration of the Chinese industry since 2014 and represents a major achievement. However, whether it is enough remains to be seen. After all, sales of over 1500kg/capita are still way above the consumption curve for developed Western-style economies. Yet, imports of cement to China from Vietnam rose in 2018, suggesting that the price rises are being driven by shortages of cement!

China is undoubtedly an exceptional case, as its economic star has blossomed in the last few decades and it has literally built itself into history. Yet one might expect its consumption to be around 1Bnt/yr, a per-capita level more similar to Spain and Italy prior to the financial crash. In other words, even if the recently observed 5% year-on-year contraction is maintained, the Chinese industry would only reach this (still very high) level by the mid 2030s. However, continued national development, mega-infrastructure projects, a shift to more exports and China’s unique market could hold the consumption per capita figure higher.

Meanwhile, Chinese producers are commissioning more and more projects outside of China. Notably, CNBM saw its cement sales everywhere except for the Middle East and China. Success abroad is not guaranteed. The story in the years to come will be the balance between projects at home and those abroad.