More movement in Italy this week with Buzzi Unicem’s purchase of three cement plants from HeidelbergCement. Buzzi acquired the Testi integrated cement plant at Greve and the Borgo San Dalmazzo and Arquata Scrivia grinding plants in Piedmont. No value for the transaction was disclosed but HeidelbergCement trumpeted that it was ‘well on our way’ to reach its target of Euro1.5bn of disposals by the end of 2020. This follows last week’s purchase of Cemitaly's Spoleto cement plant in Perugia by Colacem. Cemitaly, in case readers don’t know, is another of HeidelbergCement’s Italian subsidiaries.

Upon completion of these deals, Buzzi Unicem will own 10 integrated plants and five grinding plants in Italy. It continues the company’s consolidation drive in Italy from mid-2017 when it bought Cementizillo and two of its integrated plants for the knock down price of up to Euro125m. 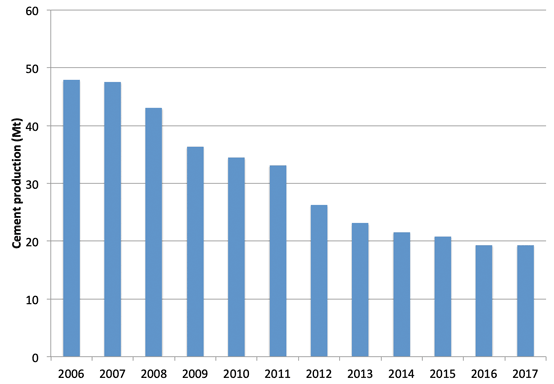 Data from the Italian Cement Association (AITEC) shows that the impetus for this consolidation trend was the reduction in Italian cement production to 19.3Mt in 2017 from a high of 47.9Mt in 2006. Despite this though the country still has a total production capacity of 37.7Mt/yr, according to Global Cement Directory 2019 data, giving it an utilisation rate of just over 50%. Production picked up again in the north and central regions of Italy in 2017 but this was insufficient to counter declines in the south and Italy’s islands. Exports have held steady in this time at around 2 – 3Mt/yr but this represents a doubling share of production from 5% in 2006 to 10% in 2017. Production has been steadily dwindling year-on-year since 2006 but domestic consumption rallied a little to 18.7Mt in 2017.

The Italian government instituted its ‘Industry 4.0’ policy in early 2017 to boost competitiveness. This included modest growth forecasts of 1%. International Monetary Fund (IMF) data shows that the country managed gross domestic product (GDP) growth of 0.9% in 2018. Yet, Buzzi Unicem reported like-for-like net sales contraction of 0.9% in 2018. HeidelbergCement was more circumspect in its reporting on Italy for 2018 but it did describe a ‘moderate’ increase in sales volumes of cement excluding its acquisitions.

With the IMF diagnosing the Italian economy as ‘weak’ and cutting its growth forecast to 0.1% in 2019 the prospects aren’t looking encouraging for the cement sector. AITEC data placed cement consumption at 309t/capita in 2017. This is on the low side for Western European standards suggesting that, although more consolidation could be coming, the market may also be down too. Its not great news for cement producers but the Italian market is edging ever closer to recovery.