Cement imports in the Philippines

Predictably, the recent investigation by the Tariff Commission in the Philippines on whether to maintain duties on imported cement recommended that the safeguard duty be kept. It even suggested raising the rate to nearly US$6/t from US$4/t at present. The report has been passed to the Department of Trade and Industry (DTI), which will make the final decision on the matter. 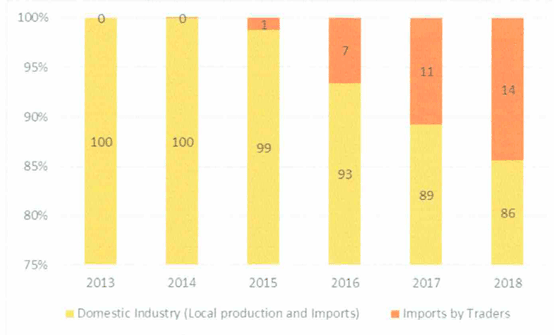 As the commission built its argument it released a great snapshot of the local cement industry and it’s well worth a read for anyone who is interested. One key graph here was the speed at which the market share of cement sold by local producers fell compared to importers from 2013 to 2018. As Graph 1 shows above, traders imported 0.29Mt in 2015 and this rose to 4.66Mt 2018. Imports by local producers also grew during this time but at a far slower rate. They were 0.45Mt in 2015, grew to a high of 1.65Mt in 2016 and then stabilised at around 1Mt/yr since then. Seven of the top 10 cement exporters were Vietnamese companies followed by two from China and one from Thailand. However, the local producers were importing clinker on a far larger scale during this period. 16.8Mt of clinker was imported from 2013 to 2018 led by Holcim Philippines with 5.54Mt or a 33% share. In Holcim’s case this was coming from China, Indonesia, Japan, South Korea, Malaysia, Thailand and Vietnam.

Elsewhere, the report established the various production capacity upgrades the local cement producers had invested in or were planning to in the near future. Taiheiyo Cement Philippines, for example, was reported as planning an expansion to its Cebu plant production line from 2022 to 2025. It then looked at kiln capacity utilisation rates, prices and how profits have changed amongst much else. It concluded that the import surge from 2015 to 2018 had depressed prices and decreased the profitability of the local producers. This fitted its definition of ‘serious injury’ as one reason to impose a safeguard duty on imports.

Importers presented a different scenario to the commission during its investigation and afterwards. Phinma, for example, told local press that the commission’s comparison calculation of the costs behind local and imported cement didn’t take into all the costs the importers endured such as a local distribution and handling once in the country. The Philippines Cement Importers Association reiterated the view of its members that they were simply meeting market demand, that local producers had caused their own problems through overcapacity and that profits varied considerably amongst local producers, amongst other arguments. This has been borne out by some of the half-year results amongst the local producers. Eagle Cement, for example, saw its earnings before interest, taxation, depreciation and amortisation (EBITDA) grow by 21% year-on-year to US$80.6m.

With the publication of the commission’s report the DTI has been handed the impetus to hold up or even raise the duty on imported cement. Based on its actions in recent years the ministry seems likely to do so. This presents a contrast to Trinidad & Tobago where importer Rock Hard Cement won a legal battle earlier in August 2019 against competitor and Cemex-subsidiary Trinidad Cement over the classification of imported cement products. These kinds of trade conflicts are likely to proliferate whilst global production capacity outstrips demand but the outcomes may vary.