Pradeep Paunrana’s latest attempt to wrest back control of ARM Cement was dismissed this week in Kenya. Administrators PricewaterhouseCoopers rejected a US$12.5m guarantee to stop the sale to a rival, according to Business Daily newspaper. Paunrana, the former managing director and majority shareholder of ARM Cement, had teamed up with Rai Group to thwart a rival bid for his company from National Cement.

The guarantee was a 20% portion of a full bid of US$63m by Paunrana and Rai Group but the administrators rejected it on the grounds that it had a nine-month time limit. They were reportedly concerned that legal proceedings over ownership of the cement producer could last beyond this. A deal to sell ARM Cement to National Cement for US$50m was agreed in May 2019. However, Paunrana fought back and the courts are expected to deliberate over the issue for some time.

ARM Cement entered administration in August 2018 following a growing loss in 2017 and poor markets in Kenya and Tanzania. At the time the cement producer blamed its poor performance on elections in Kenya causing reduced cement demand, a coal import ban in Tanzania causing production issues at its Tanga cement plant and increased competition in both countries.

The implications of National Cement actually succeeding in its bid for ARM Cement would mean a realignment of the local industry. LafargeHolcim’s subsidiary Bamburi Cement leads the sector by production capacity and market share. It operates one integrated and one grinding plant. Mombassa Cement and then a variety of smaller companies, trail it.

The Devki Group-backed National Cement has steadily been expanding in recent years. In April 2018 it was announced that the International Finance Corporation (IFC) was going to invest US$96m in National Cement and that Devki Group chairman Narendra Raval was going to commit a similar sum towards a new integrated line in Kenya and two new grinding plants in Kenya and Tanzania. More recently it acquired the long-running Cemtech plant project in West Pokot, along with its mineral deposits and licences. If it were able to successfully buy ARM Cement it would become Kenya’s second largest cement producer by market share.

ARM Cement is not the only Kenyan cement producer facing these kinds of problems. The Kenyan government is the majority shareholder East Africa Portland Cement Company (EAPCC) and it has been working on a rescue package for it since early 2019. The local market had similarly negatively affected the EAPCC’s financial performance and it has been attempting to cut its debts. In its case, it has been trying to sell land to pay off its debts but it has faced disputes with local residents. It has also tried reducing its workforce, with varying degrees of success. Its integrated plant at Athi River near Nairobi was reported to be operating at a 50% capacity utilisation rate in late 2018. 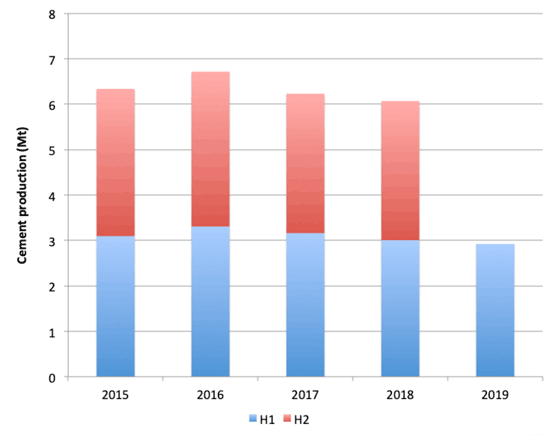 Overall cement production in Kenya peaked at 6.7Mt in 2016 and has fallen since. It fell by 2.8% year-on-year to 2.9Mt in the first half of 2019 from 3Mt in the same period in 2018. Consumption fell by a similar amount to production in the first quarter of 2019. Analysts like Knight Frank have blamed this on a slowdown in the real estate market, although it holds up hope for government house building scheme to rescue the situation.

In this kind of market it is understandable that the cement market is rationalising. The World Bank has forecast gross domestic product (GDP) growth of 5.8% in 2019 and better in the years ahead. Whoever is left in the cement business once the corporate dust settles stands to benefit.