Holcim Indonesia inaugurated a new cement terminal in Lampung last week. Unfortunately, the spectre of industry overcapacity haunts the country at present and the subsidiary of LafargeHolcim may be late to the party. The Indonesian Cement Association (ASI) has been publicly warning the government of overcapacity since the end of the summer. Its first line of action has been to lobby for restrictions on producer permits to slow the growth of new plants.

ASI figures show that cement sales in September 2016 fell by 3.3% to 5.64Mt compared to August 2016 due to lower residential sector demand. Domestic cement sales rose by 2.95% year-on-year to 44.7Mt in the first nine months of 2016 and the ASI expects sales growth of 3 – 4% for 2016 overall. Yet, the risk of overcapacity is stark. Cement production capacity has nearly doubled from 59.3Mt/yr in 2012 to 92.7Mt/yr in 2016 but demand is projected to only reach 65Mt in 2016, leaving a production oversupply of 27.7Mt. Regional consumption has fallen in Jakarta, Banten and West Java, particularly in the first two. Elsewhere, it has grown, particularly in Central Java, as well as Yogyakarta and East Java to a lesser extent.

Initial Global Cement Directory 2017 research places active production capacity at 66.3Mt/yr suggesting that the ASI may be exaggerating the risk of overcapacity. The additional c30Mt/yr capacity arises from plants that have been proposed, that are actually under construction or that have been mothballed. However, the ASI data should be more accurate as it represents the local producers. Either way, capacity is growing faster than consumption as can be seen in graph 1. 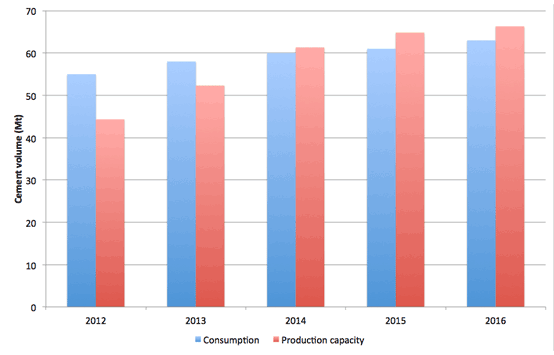 Semen Indonesia, the country’s largest producer, reported that its revenue fell very slightly to US$1.4bn in the first nine months of 2016 and its net profit fell by 8.4% to US$215m. It blamed this on a fall in sales volumes and prices due to rising competition. The other large producers have said similar in the past. Indocement, the country’s second largest producer after Semen Indonesia, saw its revenue fall by 11.9% to US$837m in the first nine months of 2016 and its profit fell by 2.2% to US$231m. LafargeHolcim described the market as affected by overcapacity and ‘a difficult competitive environment.’

Back in May 2016 a feature on the predicament facing the Indonesian cement industry in the Jakarta Post suggested that producers were building new capacity despite the risks of overcapacity to win market share. Cement producers are about to find out whether this will work or not. Meanwhile it seems unlikely that the measures the ASI is suggesting will do much to alleviate the looming crisis. Still, on the positive side, it’s looking like a good time to buy cement as a consumer.

Last modified on 23 November 2016
Published in Analysis
Tagged under