LafargeHolcim announced its plans to sell its business in Indonesia to Semen Indonesia this week for US$1.75bn. The deal covers four cement plants, 33 ready-mix plants and two aggregate quarries. It is part of its portfolio assessment scheme with a target to divest assets worth Euro1.7bn in 2019. At the current exchange rate, if the deal completes next year, then that’s most of the target met. Job done.

Earlier in the year we looked at LafargeHolcim’s options in Indonesia following speculation in the local press that it was considering selling. Our conclusion was that market overcapacity wasn’t going away anytime soon and LafargeHolcim had a publicly stated desire to sell its assets around the world to cut back its overheads towards profitability. The subsidiary made a loss in 2016 and this tripled to US$58m in 2017. Its earnings before interest, taxation, depreciation and amortisation (EBITDA) have fallen in consecutive years since 2015. LafargeHolcim has opted for the bold option to totally leave the market of one of the world’s top ten national cement producers.

From its perspective, Semen Indonesia said that it was looking forward to taking on-board Holcim Indonesia’s co-processing technology and rolling it to its other plants. Holcim Indonesia’s alternative fuels and recycling subsidiary, Geocycle, processed 0.36Mt of waste fuels in 2017, a 23% year-on-year rise from 0.30Mt in 2016. Semen Indonesia also has plans to submit a mandatory tender offer for the remaining share of Holcim Indonesia. It expressed pride at the transaction making it the biggest cement producer in South-East Asia with a production capacity of 53Mt/yr but it didn’t say exactly where it plans to sell its products. 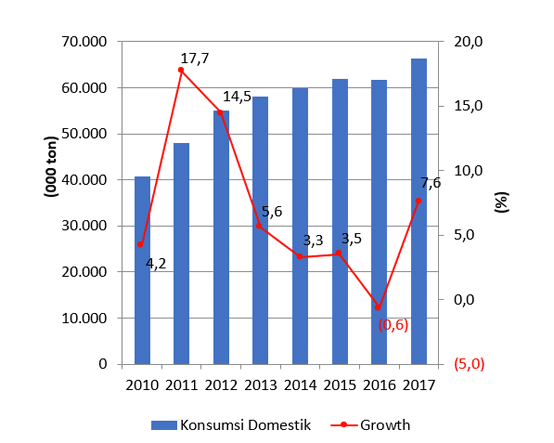 That last bit is important. Since the Holcim Indonesia assets and Semen Indonesia’s plants don’t seem to overlap too much geographically it seems likely that the competition authorities will approve the deal if they can overlook the state-owned company owning over half the country’s production capacity. Indonesian Cement Association (ASI) data put sales at 66.4Mt in 2017, giving a capacity utilisation rate of 84% using the Global Cement Directory’s national capacity of 79.3Mt/yr or 61% using the ASI’s figure of 108Mt/yr for 2017. ASI data shows that local cement consumption grew by 7.6% year-on-year in 2017 following five years of slowing growth. So far, growth for the first half of 2018 seems slower at 3.6% year-on-year to 30.1Mt. These figures may have prompted LafargeHolcim to make its final decision to exit the country suggesting that there is no end in sight to the poor market.

LafargeHolcim’s decision to leave Indonesia seems sound but the selling price seems low and it is walking away from a large market. Either the production assets are old, the market is worse than we think it is or something else is going on. That said though, LafargeHolcim has taken decisive action that should ultimately benefit its bottom line.

Last modified on 15 November 2018
Published in Analysis
Tagged under