Cemex was the first of the big multinational cement producers to release its fourth quarter results this week. Revenue, sales volumes of cement and gross profit were all up in single digits. Earnings growth was less impressive, with operating earnings before interest, taxation, depreciation and amortisation (EBITDA) rising by 1% year-on-year on a like-for-like basis to US$2.56bn in 2018. This was a decrease of 1% in real terms. Cemex blamed this on rising energy costs and on lower earnings from its territories outside of Mexico and the US. 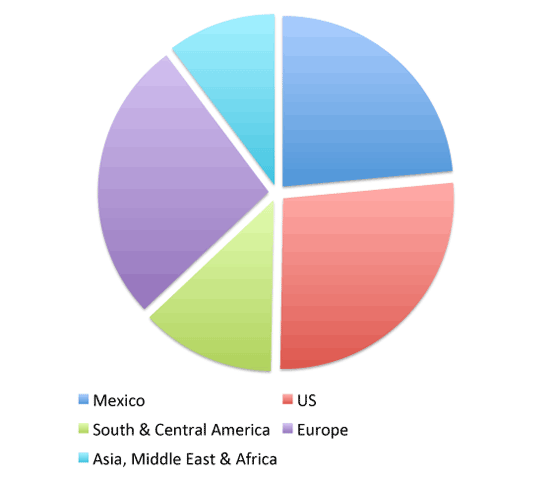 As Figure 1 shows, over three quarters of Cemex’s sales come from Mexico, the US and Europe. Elsewhere its presence is smaller but it does have plants in key countries like the Philippines and Egypt. The former, for example, saw its cement sales rise by 7% in 2018 bringing along the rest of the Asia, Middle East and Africa region into volume growth.

Some other non-financial results to consider lead with the good news that 2018 was the first year ever that Cemex has had without any employee fatalities. This probably doesn’t include contractors or third parties, we’ll have to wait for the next sustainability report to find out for sure, but this is undoubtedly a milestone. Another point of interest was the growth of Cemex Go, its online sales platform. In 2018 it was responsible for around 40% of the company’s sales volumes. Around 85% of its recurring clients use it and it has nearly 30,000 customers. The analytics alone from the system and the potential for further tailoring it towards both customer and company objectives sound promising. Lastly, Cemex was also keen to note its alternative fuels substitution rate of 27% in 2018.

In this way Cemex has been ahead of the curve of the major European cement multinationals like LafargeHolcim and HeidelbergCement that have taken on ‘indigestible’ acquisitions more recently. Possibly behind all of these companies is CRH, which has steadily been growing in recent years through acquisitions. It made the headlines this week on the corporate side when Swedish so-called ‘activist investor’ Cevian bought what is thought to be around a 3% stake in the Irish company. The financial press thinks it’s after a seat on the board to try and influence CRH to focus on margins rather than its acquisition strategy. CRH’s EBITDA margin was 12% in 2017 compared to 23%, 19% and 19% for LafargeHolcim, HeidelbergCement and Cemex respectively. This is just one way of comparing these companies. CRH, for example, might be keen to promote how its other metrics like cash generation and return on capital employed perform compare favourably to its competitors.

The point though is that it has taken Cemex over a decade since its acquisition of Rinker to rebuild its finances. All being well, it stands ready to take advantage of whatever the cement market holds in the 2020s.

Last modified on 14 February 2019
Published in Analysis
Tagged under