Under the current circumstances it’s not surprising to see how much Indian cement production fell in April 2020. Like many other countries, its lockdown measures to combat the coronavirus outbreak suppressed industrial output. Yet seeing an 86% year-on-year fall in the world’s second largest producer is shocking. Cement production declined to 4.1Mt from 29.2Mt. Further data shows, as part of the Indian government’s eight core industries, that steel and cement production suffered the most. Coal, crude oil, natural gas, petroleum refinery products, fertilisers and electricity generation all fell by far less. 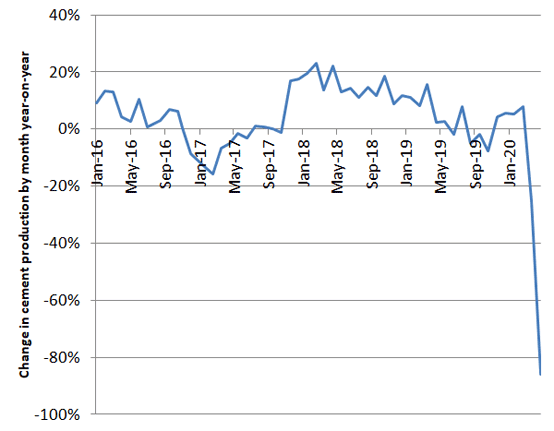 By comparison in China monthly cement output only fell around 30% at the peak of its outbreak. The difference is that China implemented a graduated lockdown nationally, with the toughest measures applied in Wuhan, the place the outbreak was first identified. As we reported in April 2020 demand for cement in Wuhan had fallen by around 80% at the time its lockdown ended. Production and demand are different, but India’s experience feels similar except that it’s on a national scale. The last time the country had a dip in cement production recently was in late 2016 when the government introduced its demonetisation measures and dented cement production growth rate (and national productivity) in the process.

UltraTech Cement, Orient Cement, Ambuja Cement, India Cement, Dalmia Bharat, JK Lakshmi Cement, Shree Cement and others all suspended operations to varying degrees in the first phase of the lockdown in late March 2020. Operations of industrial plants in rural areas was then cleared to restart in mid-April 2020, although subject to local permissions and social distancing rules, as the country’s lockdown zones took shape. All of this started to show in company results towards the end of March 2020 as sales started to be hit. The worst is yet to filter through to balance sheets.

March 2020 was a particularly bad time for the government to shut down cement plants because it is normally the month when annual construction work peaks. Cement production usually hits a high around the same time. The monsoon season then follows, reducing demand, giving producers a poor time to restart business. Credit ratings agency Care Ratings has forecast that capacity utilisation will drop to 45% in the 2020 – 2021 financial year. This follows a rate of 65 – 70% over the last six years with the exception of 2019- 2020, which was dragged down to 61% due to lockdown effects. On top of this labour issues are also expected to be a major issue to the sector returning to normality. The mass movement of workers back to their homes made world-wide news as India started its lockdown. Now they have to move back and Care Ratings thinks this is unlikely to complete until after the monsoon season, by September 2020. Hence, it doesn’t expect a partial recovery until the autumn, nor a full recovery until January 2021 at the earliest.

Not everybody is quite as gloomy though. HM Bangur, the managing director at Shree Cement recently told the Business Standard newspaper that he was expecting a rebound following the resumption of production in May 2020. He also reported a capacity utilisation rate of 60% at his company, higher than Care Rating’s prediction above, and he noted a difference between demand in rural areas and smaller cities (higher) compared to bigger cities (lower).

India is now pushing forward with plans to further unlock its containment measures to focus on the economy. However, daily reported news cases of coronavirus surpassed 8000 for the first time on Sunday 31 May 2020. How well its more relaxed lockdown rules will work won’t be seen for a few weeks. While this plays out we’ll end with quote from HM Bangur that will resonate with cement producers everywhere: “sales are imperative.”