Two supplier news stories this week presented a snapshot of the global cement industry. The first was FLSmidth’s annual results for 2018. The second was the announcement by France’s Fives that it had signed a collaboration agreement with China’s CNBM.

Overall FLSmidth reported its highest order intake in six years with revenue growth driven by its minerals division. On the cement side though the equipment manufacturer was blunt, describing the market for new cement capacity as, “subdued with low plant utilisation globally.” In its assessment a slow increase in global consumption outside of China was not enough to absorb overall production overcapacity. It said it saw a ‘healthy’ level of small to mid-sized orders for grinding plants, upgrades, retrofits and single equipment orders. The market for replacements and upgrades was identified as a strategic focus. It also noted environmental upgrades for plants in China and India as environmental regulations tighten.

Fives’ news touched on the rivalry that western-based manufacturers have faced from Chinese competitors. Fives and CNBM have agreed to explore projects together in new plants, expansions and upgrades. Although the press release was brief, this seems to involve CNBM using Fives technology such as grinding mills, pyro-lines and burners. Like the rest of the industry Fives has had a tough time of it in recent years in the cement sector although 2018 seemed to have improved considerably at the nine-month stage in September 2018. So signing an agreement with a competitor at this stage is interesting. FLSmidth did a similar deal with CNBM in mid-2018 when it signed a framework agreement for future collaboration.

The context here is that the new plants that are being built are often part of China’s One Belt, One Road Initiative, typically in Central Asia or Africa. Mostly these plants are being financed by Chinese joint ventures and built by Chinese suppliers. This week Reuters published a map of new cement plants being built in 2018 with Chinese involvement along the silk road using Global Cement data. Rightly, FLSmidth and Fives are taking steps to be a part of this growth. 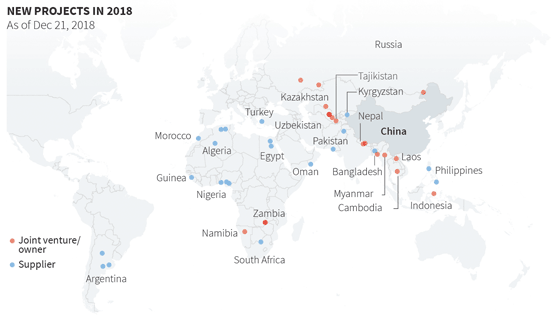 There is a tendency in the western press to play up Chinese imperial ambitions exemplified by US Vice President Mike Pence’s comments at the Asia-Pacific Economic Cooperation summit in Papua New Guinea in November 2018. Yet, Sinoma International Engineering, one of CNBM’s engineering subsidiaries, reported that its new order intake fell by 14% year-on-year to US$4.56bn in 2018. No reason for the decrease was given but most of this fall seemed to come from its construction division. In turn most of this came from a fall in foreign orders. The implication is that China’s attempts to move its cement industry out of the country may not be happening fast enough to preserve the size of these companies.

Returning to European equipment suppliers, FLSmidth summed up its response to this situation in its annual report. The cement market is split between premium and mid-market projects, with the latter dominated by Asian suppliers. FLSmidth says it is targeting the mid-market by becoming the preferred original equipment manufacturer (OEM) of choice. They are not alone in their ambition as the Fives deal shows.

Last modified on 06 February 2019
Published in Analysis
Tagged under