Good news for Cemex Colombia this week with an agreement reached to open its Maceo cement plant in Antioquia. Local media was reporting that the cement producer has struck a government-brokered deal with CI Calizas y Minerales to lease the land it built its plant on. Finally, the new(ish) US$350m integrated plant can start operation.

For those unfamiliar with the debacle, Cemex has been fighting the fallout publicly since 2016, following a dodgy land deal at the site. The 1Mt/yr integrated Maceo plant was originally announced in 2014 with full operation scheduled for late 2016. Then, in October 2016 Cemex fired several senior staff members in relation to the project and its subsidiary’s chief executive resigned. This followed an internal audit and investigation into payments worth around US$20m made to a non-government third party in connection with the acquisition of the land, mining rights and benefits of the tax free zone for the project. Other irregularities are also alleged to be linked to the project. As well as the Colombian authorities being involved, the US Department of Justice is also running its own investigation into the affair with wider implications for Cemex’s operations in other Latin American countries. Some of the sacked staff members and others have since been investigated on corruption charges. 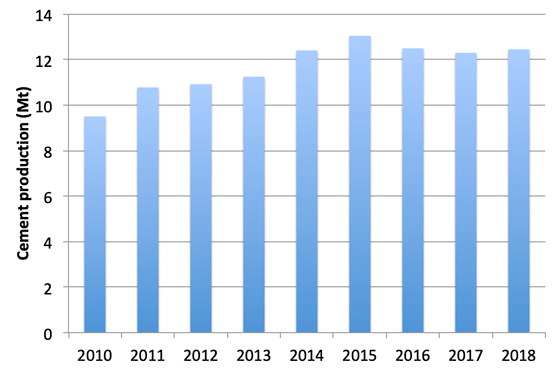 Looking at the wider Colombian market though, it does make one wonder whether the long-delayed plant is really necessary. As Graph 1 shows, cement production rose steadily year-on-year to 2015 before it hit a downturn. It reached a high of 13Mt in 2015 before declining. Production in 2018 grew slightly compared to 2017 but not at the same rate seen previously. In Antioquia specifically despatches increased by 1.3% in 2018, above the national average of 0.2%. Despatches now appear to have continued into January and February 2019.

Cemex Colombia started to benefit from an improved fourth quarter in 2018 as the general economy picked up. Despite this its overall net sales and operating earnings fell in 2018. However, it did flag its earnings margin as a concern with higher freight and energy costs in the fourth quarter of 2018, although it partially offset this with higher prices. Cementos Argos, the other big producer in Colombia, reported a similar picture to Cemex, although in a better position. Its cement volumes fell slightly for the year in 2018 but picked up fast in the fourth quarter. Annual revenue was down slightly, as were adjusted earnings. In its opinion the construction industry improved in the second half of 2018 due to an improved housing market and infrastructure projects.

Given the downturn in production since 2015 the thought does occur whether the opening of the Maceo plant being delayed accidentally helped Cemex or not. It has probably been losing money by not running the plant but if, for example, the company had some sort of insurance to protect it against unexpected delays it might still benefit. However, if evidence of serious wider misconduct in both Colombia and other Latin American countries are found by the US authorities, then things could get expensive. This would be unfortunate, particularly in Colombia, given that the market looks set to recover.