The agreement this week by Ciments du Maroc to buy two production projects from Anouar Invest Group marks a consolidation phase in the local market. The subsidiary of Germany’s HeidelbergCement has struck a deal to acquire Atlantic Cement’s 2.2Mt/yr integrated plant project in Settat province and the Les Cimenteries Marocaines du Sud (CIMSUD) 0.5Mt/yr grinding plant at Laâyoune, which was only recently commissioned. 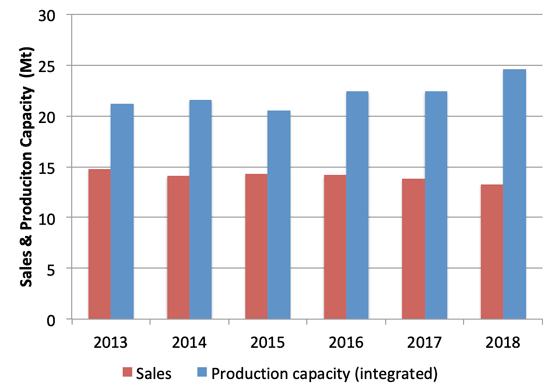 Graph 1 gives an impression of the market conditions the cement producers have faced over the past five years. Cement sales hit of a high of 16.1Mt in 2011 following increasing growth in the 1980s, 1990s and 2000s. Cement sales have since wilted, while production capacity has increased pushing down the capacity utilisation rate. The capacity utilisation dropped below 55% in 2018, using Global Cement Directory 2019 data, although other sources have placed it at around 60%.

LafargeHolcim Maroc’s turnover fell by 2% year-on-year to US$837m in 2018 along with a drop in consolidated net income of 18% to US$201m. It attributed this to lower sales and growing petcoke costs. Ciments du Maroc’s turnover fell slightly to US$419m but its net profit rose by 3% to US$108m. This followed a generally positive year in 2017 due to a strong second half of the year. It blamed the instability on a poor real estate market. CIMAT managed to raise its sales in 2018 by 6% to US$300m and its income by 1.4% to US$90.7m.

Anouar Invest Group’s decision to sell up may mean that its attempt to break into the cement market has failed. Who can blame it given the market conditions. Although, who knows, HeidelbergCement may have made it a great offer. HeidelbergCement’s gambit is also interesting because, in February 2019, it reduced its stake in Ciments du Maroc by 7.8% to 54.6% signalling less confidence in the country.

Yet, cement sales started to improve in the first quarter of 2019 with consecutive month-on-month improvements. Neither is Anouar Invest Group the last company to try its luck with cement production in Morocco. In June 2019 FLSmdith announced that TEKCIM had ordered a US$45m cement plant from it and Société Générale des Travaux du Maroc. The grinding unit has a production capacity of 1.2Mt/yr. Clearly, despite a market with production overcapacity, companies are sensing opportunities with the cement grinding model.