FLSmidth revealed this week that Cooperativa Boliviana de Cemento, Industrias y Servicios (COBOCE) has ordered a cement mill for its Irpa Irpa plant near Cochabamba. The Danish engineering firm was pleased to note that with the sale it has now delivered mills to three of the country’s five producers. Other recent orders include supplying an OK 36-4 mill to Sociedad Boliviana de Cemento’s (SOBOCE) Viacha cement plant, announced in early 2016, and a sale of a complete integrated production line at Sucre to Fábrica Nacional de Cemento (FANCESA) in late 2016.

These order reveal slow but steady growth in the local industry in recent years. However, a slowdown so far in 2017 suggests that the market is changing. National Institute of Statistics of Bolivia (INE) data shows that sales in the local market broke down in 2016 into a 42% sales share for SOBOCE, 25% for FANCESA, 19% for COBOCE, 8% for Yura and 6% for Itacamba. This changed somewhat in the first quarter of 2017 with a reduction in the sales of SOBOCE and Yura. Sales in the country are concentrated in the departments of Chuquisca, La Paz and Cochabamba, which held 70% of cement sales in 2016. 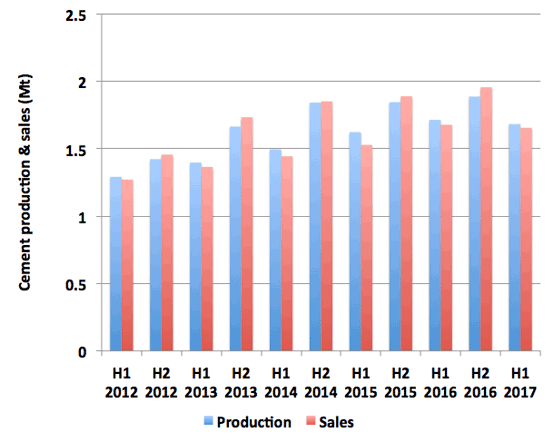 Annual cement sales in Bolivia have been growing consistently since 2001. Financial services company Pacific Credit Rating placed average annual sales growth at 7.72% from 1998 to 2016. In 2016 sales reached 3.7Mt. Graph 1 shows a continuation of this trend although the first half of 2017 has been weaker than 2016. COBOCE blamed the reverse in 2017 on reduced local government spending on infrastructure projects and poor weather. The producer was expecting sales to grow by 6 – 8% as a whole for 2017. However, on the basis of the figures for July and August 2017 this is not looking likely. Sales for the two months dropped by 2.5% year-on-year to 0.64Mt. A representative of FANCESA later blamed the market change on a reduction in sales supporting the construction of tall buildings in the country’s key markets as customers switched to buying ‘random’ volumes.

Sure enough local producers have started to complain about foreign exporters damaging their trade. A union head in Chuquisaca called for cement and clinker imports by Yura from Peru to be banned and concerns have been raised about concessions offered to Itacamba, a joint venture between Spain’s Cementos Molins, Brazil’s Votorantim Cement and Camba Cement. President Evo Morales inaugurated this company’s new plant in Yacuses, Santa Cruz in early 2017. The niggles about foreign exports to Bolivia seem counter-intuitive given that the country is landlocked and it has the world’s highest capital city above sea level. Usually, markets with nearby ports are most at risk from clinker and cement imports. Yet, Itacamba was planning exports to Argentina in November so the import and export markets via road and river links can’t be discounted.

Cement sales may be down so far in 2017 but overall the wider economy appears to be in rude health. After a strong decade of growth the national Gross Domestic Product (GDP) growth rate has fallen each year since 2014, but it was still 4.3% in 2016, one of the highest in South America. If that kind of growth persists it seems unlikely that the cement industry will have trouble for long.