First half 2019 roundup for the multinational cement producers

With a good number of the financial results published by the non-Chinese multinational cement producers for the first half of 2019, it is now time for a roundup. Graphs 1 and 2 below lay some of the basics with the general sales revenue and cement production volume trends. 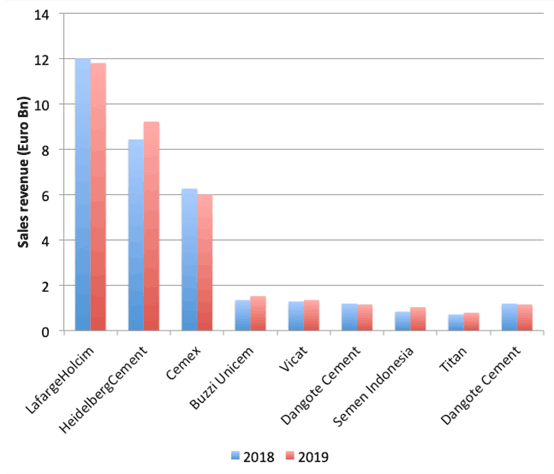 Graph 1: Sales revenues from large multinational cement producers in the first half of 2019 and 2018. Source: Company reports. 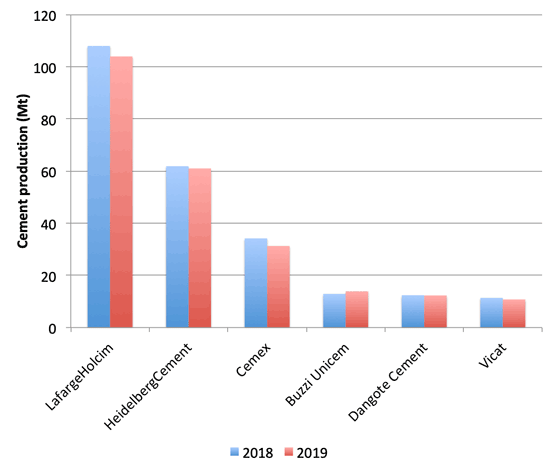 This is only part of the picture as the larger companies had various complications. For example, LafargeHolcim’s apparent falling revenue and sales volumes is mainly due to its massive divestments in South-East Asia. On a like-for-like basis its sales and sales volumes of cement rose. Its recurring earnings before interest, taxation, depreciation and amortisation (EBITDA) better illustrated this with a rise of 7.2% year-on-year in real-terms to Euro2.41bn in the first half of 2019 from Euro2.25bn from 2018. The company didn’t have it all its own way though with falling cement sales volumes in Asia despite the divestment and poor growth in its Middle East Africa region.

By contrast HeidelbergCement reported growing sales but its earnings and profits were down. Its profit fell by 33% to Euro291m from Euro435m. This was blamed on the group’s sale of its Ukraine subsidiary in April 2019. The operations were sold to Overin Limited, part of Ukrainian investment company Concorde Capital Group, for Euro13m. HeidelbergCement said that the divestment resulted in a loss of Euro143m. Aside from this, as Bernd Scheifele, the chairman of the managing board of HeidelbergCement, explained, positives in markets in Asia, Western and Southern Europe compensated for weaker business in North America and the Africa-Eastern Mediterranean Basin Group area.

Cemex has a tougher time of it than its larger rivals due its greater reliance on American markets. Slow starts to infrastructure projects were blamed in Mexico, poor weather hit earnings in the US and problems occurred further south too. Luckily Europe was strong for the company with lots of good news areas. It wasn’t enough though as Cemex’s sales fell by 4% to US$6.72bn from US$7bn and its operating EBITDA dropped by 11% to US$1.21bn from US$1.36bn.

As for the other companies covered in the graphs, Buzzi Unicem and Titan Group prospered due to the US market. The former described its US activity as ‘lively.’ However, it admitted that its sales growth there was mainly caused by falling imports in the face of weak domestic demand and ‘considerable production and logistical difficulties’ in June 2019 caused by flooding of the Mississippi river. Titan, meanwhile, caught a well-deserved break after recent years with growth also in Greece and Southeastern Europe. Vicat managed to stave off a decline in sales due to poor markets in Turkey, Switzerland, Indian and West Africa through its acquisition of Brazil’s Ciplan in late 2018. Yet, its earnings and cement sales volumes fell anyway.

Dangote Cement once again suffered at home in Nigeria, while its Pan Africa business grew. Trouble at home was pinned on lower volumes, price discounting, higher input and distribution costs and higher fuel and power costs in the first half of 2019. Of more concern, earnings fell in Pan Africa too in the first half due to market conditions in South Africa and Zambia. As ever though Dangote Cement’s diversity in Sub-Saharan Africa should see it through. Finally, Semen Indonesia continued to ride high as its sales increased by 23% to US$1.17bn due to its absorption of LafargeHolcim’s assets. Unsurprisingly, its sales volumes grew at a similar rate, to just below 13Mt in the first five months of 2019. Yet trouble may be store ahead as its local sales fell by 7% in this period.

Other major producers omitted here include Ireland’s CRH and India’s UltraTech Cement. Both are set to release their results later in August 2019 and will make for essential reading as the market conditions so far in 2019 become clearer. The latter in particular will be worth watching if a report by Indian credit agency CARE Ratings out this week is correct. It has forecast production capacity growth of 120Mt by 2030 in India. UltraTech Cement is perfectly poised to benefit from this.