As ever, there have been plenty of news stories from Pakistan recently covering the on-going fallout of the water shortage at the Katas Raj Temples in Chakwal, Punjab and an update on new production line at Maple Leaf Cement’s Iskanderabad plant. The two stories present two sides to the furious pace of the local industry and the potential price this growth might entail. 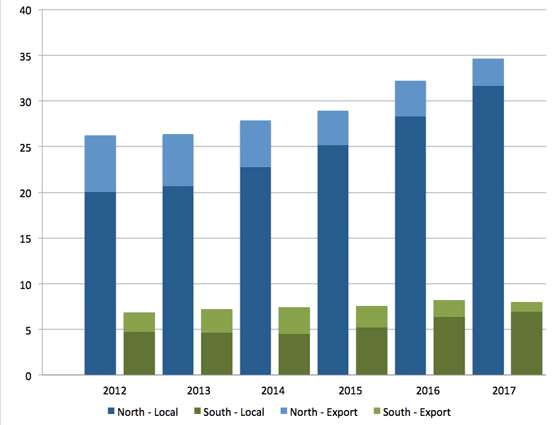 Graph 1 above sets the scene with an industry that has seen total despatches grow by nearly 30% to 42.8Mt in 2017 from 33.1Mt in 2012. About four-fifths of this is based in the north of the county. The big sub-story alongside this is that exports have fallen by half to 4.2Mt in 2017 from a high of 8.3Mt in 2013. The cause of this appears to be a decline in the Afghan market and a similar drop in waterborne clinker exports. Given the higher proportion of exports to the southern market this change has likely hit the industry in south harder despite overall depatches there rising. So far in 2018 similar trends are holding, except for exports, where the clinker export market has rallied significantly in the south.

The background to all this growth domestically is Chinese investment in the form of the China-Pakistan Economic Corridor (CPEC). CPEC-related project include integrated road infrastructure, the modernisation of railways and the development of the city of Gwadar and its related infrastructure. In addition the local Public Sector Development Programme (PSDP) is also having an effect and demographic pressures, such as a housing shortage, are also expected to support the construction market.

Data from the All Pakistan Cement Manufacturers Association (APCMA) placed cement production capacity at 54Mt/yr in September 2018 compared to 66Mt/yr in the Global Cement Directory 2018, which includes new capacity being built. This compares to around 10Mt/yr in the 1995 local financial year to an estimated 73Mt/yr by the State Bank of Pakistan in its third quarter report for 2017 - 2018. This rapid growth can be seen in recent stories such as the Iskanderabad plant expansion, Flying Cement’s mill order from Loesche, Kohat Cement’s mill order also from Loesche, a new solar plant at Fauji Cement at its Attock plant and the commissioning of DG Khan’s new plant at Hub. These stories are all from the last three months! The State Bank of Pakistan estimated that 11 producers hare now investing US$2.12bn on capacity expansions to add over 23Mt/yr by the end of the 2021 financial year.

One potential price for all of this growth is currently being illustrated in the ongoing legal wrangles about the use of water by cement plants near the Katas Raj Temples. What started as an investigation into why water levels were dropping at a pond at a Hindu heritage site seems to have transformed into a full scale inquiry into alleged corruption by local government around the setting up of cement plants. A report by the Punjab Anti-Corruption Establishment Lahore to the Supreme Court has found irregularities committed by government departments in connection to the setting up of cement plants by DG Khan and Bestway Cement in Chakwal. It seems unlikely at this stage that this inquiry will cause too much trouble for the local cement industry but it will certainly make it more complicated and potentially more expensive to st up new plants in the future.