Cementos Molins’ financial results took a tumble this week, in part due to the poorly performing Argentinian economy. A decrease in sales in Mexico was also to blame but rampant inflation in Argentina caused the Spanish cement producer problems.

Cementos Molins owns a 51% stake in Cementos Avellaneda, with Brazil’s Votorantim Cimentos owning the remainder. Molins took pains in its financial report to point out that the aggregate rate of inflation had been 109% in mid-2018. Accordingly, its income and earnings in 2018 would have been much better if the economy had been in a better state. As it was, its income fell by 24% year-on-year to Euro134m and its earnings before interest, taxation, depreciation and amortisation (EBITDA) dropped by 30% to Euro30.3m. Adjusted for negative inflationary effects these should have risen by 43% and 31% in 2018. 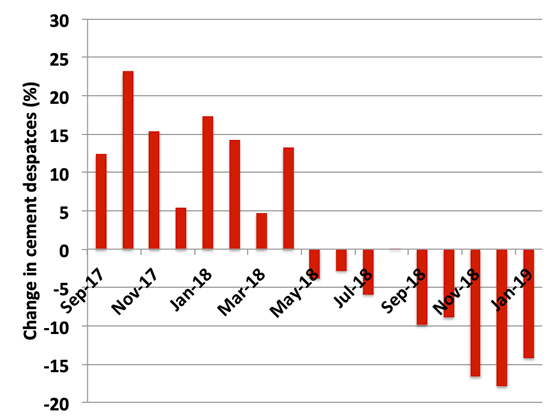 The other major local producers, Loma Negra and LafargeHolcim Argentina, are owned by Brazil’s InterCement and Switzerland’s LafargeHolcim respectively. Both companies are due to present their financial results later this week but the signs were not looking good earlier in the financial year. In its third quarter results Loma Negra said that the general economy was dragging on cement demand. Construction activity data from El Instituto Nacional de Estadística y Censos de la República Argentina (INDEC) showed that growth nosedived in mid-2018. This corresponds roughly with falling year-on-year cement despatches. Loma Negra noted that the depreciation of the Argentine Peso was hitting its bottom line and that its cement sales volumes dropped by 6.2% to 1.61Mt in the third quarter of 2018 from 1.72Mt in the same period in 2017. Despite this, its net revenue grew by 42.3% in the nine months to the end of September 2018.

Understandably, much of the talk in Loma Negra’s third quarter earnings call was about the effects of local currency depreciation with questions about how the expenditure for its L’Amalí plant expansion project was split between different currencies or how fuel costs were being affected. More revealing though was information about Loma Negra’s plans to reduce production capacity as national demand falls. Chief executive officer (CEO) Sergio Faifman said that the production cost at L’Amalí would be US$15/t less than the national average and that its Olavarría and Barker integrated plants would be first in line for production cuts given their closeness to L’Amalí.

Holcim Argentina reported ‘significant’ growth until May 2018 in its third quarter report. From here its sales fell and it expected zero growth for the year as a whole. It blamed this on the state of the general economy, the lower attractiveness of mortgages in the residential sector and problems with infrastructure project financing. Its sales volumes of cement rose by 6.4% year-on-year to 2.54Mt in the first nine months of 2018 from 2.39Mt in the same period in 2017. Holcim Argentina also has an upgrade project underway, at its Malagueño cement plant near Córdoba. Once completed by the end of 2019, the project is expected to increase the unit’s production capacity by 0.73Mt to over 3Mt/yr.

The problems facing the Argentine cement producers are clearly due to the poor general economy. The government took a US$56bn loan from the International Monetary Fund (IMF) in mid-2018 to shore up the situation. Since then the Argentinean Peso seems to have stabilised against the US Dollar and inflation has settled. At this point the question is whether this is the bottom of the economic trough. The other thing to note is that Argentina has faced economic problems at the same time as Turkey. Although Turkey has a much bigger cement industry, both countries are prominent cement producers in their regions.

The sad thing though is that the local cement market was facing shortages in late 2017, producers were investing in new production capacity and Loma Negra launched an initial public offering (IPO). All of this growth in the cement industry has been jeopardised by the general economy. Let’s hope it rebounds soon.